Just recently, I have written about Sonisphere and Hellfest. It occurred to me while writing about Sonisphere that I didn’t write a blog about the last Download announcement. I then left the writing to go out and be sociable and by the time I had returned, there was another band announcement! So I’m just going to go over the announcements briefly and give my thoughts. I did post about the leak of Europe and Symphony X and what that would mean for 2nd stage Friday. Below is the new poster and these are the bands that have been announced in the last two batches. Doing them in batch order 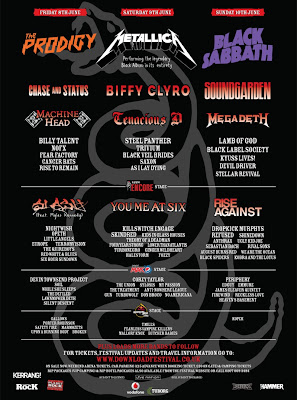 Europe – Quality announcement as far as I’m concerned. People are happy about them because they’ll get to hear one classic song of Europe’s but I thought their whole set at Sonisphere was really good.
Halestorm – Quite like the stuff I have heard from this band. I’ve heard varying reports of what they are like live though from superb to awful, but in studio the stuff sounds good.
Firewind – Widdly power metal at its best! I quite like what I’ve heard of this band and yet somehow have managed to never see them live. A real shame
Turbonegro – Don’t mind what I’ve heard from this band but wouldn’t be sad if I didn’t get to see them.
Theory of a Deadman – They weren’t bad when supporting Alter Bridge so this could be kinda cool. I’d watch them depending on who they clash with.
Stellar Revival – I’m afraid I have nothing for you on this one!
Anti-Nowhere League – One of the bands that inspired Metallica. I’m a little bit favourable to them because of this. I actually wouldn’t be shocked (considering they are playing the same day) for them to get up with Metallica during the encore and play “So What” – now that would be cool.
Turbowolf – They sound alright and could be worth a watch, clash depending of course.
Mallory Knox – They seem alright but I’m not massively into what I’m hearing. They’re ok – that’s all.
The Safety Fire – File this along with Stellar Revival...
Emmure – They sound quite good, although the vocals seem a little off-putting at times (coming from someone that may see Cannibal Corpse this summer, that doesn’t make a great deal of sense I’m sure).
Broken – See the file marked Stellar Revival and The Safety Fire. However, when searching for them on Spotify I did stumble across an Avantasia song which I don’t know if I’ve ever listened to called Blizzard of a Broken Mirror. Cheers Broken!

So all in all, this batch of bands isn’t that bad at all. Europe obviously being the big hitters from the group is a superb announcement. Think all of it falls under the banner of “clash permitting” as to whether I go to see the bands or not. This really makes the festival look stronger as a whole. Now, the newest announcement from last night read like follows:

Refused – The first band that was booked for Sonisphere which has now been booked for Download following the cancellation of Sonisphere. Cracking announcement though – I remain interested as to where they will play. I hope to see them at Hellfest but seeing as they are headlining a little tent by the looks, it may not happen.
Gallows – This is a really cool announcement for me as I saw them at one of their last UK dates with Frank Carter handling vocal duties and that has now gone to Wade MacNeil (formerly of Alexisonfire). I’ve heard since he took over, Gallows have stepped up a level in terms of live performance. I would like to see if this is the case. Excellent booking though.
Kids In Glass Houses – They don’t do a great deal for me personally.
Lower Than Atlantis – Neither do they.
Four Year Strong – Leaked by Andy Copping on Twitter. A pretty good announcement. I got them and All Time Low mixed up though. So I thought when I saw them “oh man, Lost In Stereo is an awesome song” – it still is, but is completely irrelevant to FYS. I do like FYS though so given the chance I will see them.
Don Broco – They aren’t a bad band as such, but they seem a tad dull based on what I’m hearing. Probably won’t be seeing them.
Porter Robinson – A very different band to that you would usually get at Download but I actually quite like what I’m hearing. Would expect to hear this in the dance tent at Reading/Leeds rather than Download but oh well!
T. Mills – Yeah this really isn’t for me.
Fearless Vampire Killers – They certainly aren’t an awful band, by any means. Don’t foresee me seeing them though.
Kobra & The Lotus – Leaked by Andy Copping. They aren’t bad from the one song they have online.
Rival Sons – Another leak by Andy Copping. They’re pretty good. Caught the end of their set supporting Black Stone Cherry. I don’t think I’ll be seeing them, but they aren’t bad.
My Passion – Leaked today. Not bad at all!
Black Spiders – The first leak from Andy Copping. Excellent, excellent announcement. Can’t wait to see these guys at Download. So good.
Edguy – BEST. ANNOUNCEMENT. EVER!!! Ok perhaps not the best but still, this is so so good. They were one of the main Hellfest draws for me, so that’s a tad annoying, but aww hell yeah! 2 times for Edguy in 2 weeks? Superb sir!

This second batch has a lot more in it for me, not least Edguy. I have real concerns over clashes and just how many times I’m going to have to cut sets in half to go see someone else. It isn’t like Sonisphere in that respect as if you are at 3rd stage and need to walk to the 2nd stage; it is a fair old hike. Anyway – these concerns weren’t helped at all by Andy Copping announcing more bands for Download while I was writing this review of the announcements. Let’s have a look at this next batch then!

Lawnmower Deth – I’ve heard a lot of good things about this band live. Apparently they are a lot of fun. Anyway, I like what I am hearing. Not entirely convinced the cover of Kim Wilde – Kids In America was a good call mind!
No Americana – Not bad at all. A little bit pop-punky which is never a bad thing (actually it can be bad. This seems somewhat irrelevant to this announcement as they aren’t bad. Moving on).
Silent Descent – Not bad at all.
Six Hour Sundown – Oh hai Lauren Harris! I really quite like the song on Spotify. Hell, I didn’t mind the previous incarnation under the moniker “Lauren Harris”.
Skindred – I love Skindred. They have been excellent every time I have seen them live so I am not complaining about this announcement. Especially as their set is allegedly starting as soon as The D finish. Excellent stuff
The Union – They are quite enjoyable. Very classic rock sort of vibe from this band. If they were early on an open air stage then it is certainly possible that I would could lie down towards the back of the stage and listen to these, no problem!

So another 6 bands added to what is turning into possibly the best Download festival line-up ever (a strong statement considering they’ve had AC/DC, Aerosmith, Iron Maiden etc headline). It could easily be the best festival I’ve ever been to. I was going to have a stab at stage times but truth be told, I wouldn’t know where to start now. I could guess Friday’s but Saturday and Sunday have significant differences to the previous years. That coupled with the latest news that Five Finger Death Punch have had to pull out means I would be in a tailspin trying to figure it out.

Not looking at the inevitable number of clashes there will be - I want to see 49 bands. There are also others I wouldn’t mind seeing. Download looks amazing – end of.
Posted by Mike Tyler at Friday, April 06, 2012