22 is a lucky number for some. For others it is just a number. What 22 actually means in the context of this blog though is the latest number of bands announced for the Download Festival. This is the poster where we can see not only the new additions but more of where bands fit on the line up. For the purposes of this post, I will discuss the 22 bands and then discuss the line up and how it looks for me. 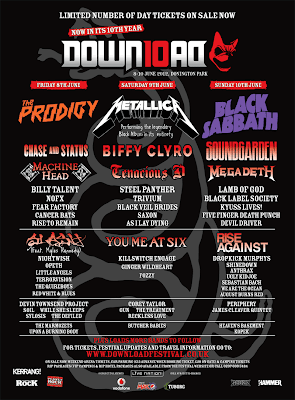 The new announcement then:

Corey Taylor – This could be a quality announcement. I’ve only seen him the one time without Slipknot or Stone Sour and it wasn’t the best. The set was at Sonisphere 2009 and was rife with sound problems. That coupled with a mediocre set list meant I didn’t really enjoy it. The set in 2010 (which I didn’t see) had a far better set list and the shows he has done since releasing his book have looked phenomenal. If there is chance to see him, I may just.

Dropkick Murphys – I was really looking forward to seeing these guys at Reading in 2008 and then I discovered they were clashing with one of my favourite comedians, Adam Hills. Seeing as we still discuss Adam Hills’ set from that day, I feel like I made the right call. Doesn’t change the fact that I want to see Dropkicks and I am really happy with this announcement. Their stage positioning will be discussed later.

Cancer Bats – Cancer Bats being on the main stage sure is an interesting one but I reckon it will work. It is a quality announcement, of that there is no doubt. It will be a strange moment for me seeing them on the big stage, considering I am seeing them 3 times in April (all on one day) in venues smaller than one of my shoes*
*slight exaggeration

Rise To Remain – Seem to play all the festivals really but based on their set last year, they really deserve the bump to main stage and I will likely watch them again.
Saxon – This is a quality announcement. I’ve seen them twice at festivals and they always seem to bring it live so I imagine this will be no exception.

Gun – They seem fairly reasonable from what I’m hearing. I didn’t know of them before this announcement, and their cover of Cameo’s “Word Up” is certainly enjoyable.

Heaven’s Basement – I’ve seen this band live (supporting The Wildhearts if memory serves) and they were really good. I remember thinking they were a sure thing to make it big. They even played Sonisphere the year after which I thought was great (although I was unable to catch them). I heard they’ve had a few member changes since the time I saw them. I have no idea how that will affect them but I’d like to see them if the chance arises.

James Cleaver Quintet – They sound very noisy and that to me is a great thing. I’ve been listening to a song called Golfing Pros, Bitches and Hoes which I am in love with. Excellent booking here.

Kopek – I don’t know much about this band but I’ve just checked out a video of theirs on Facebook and it seems pretty good.

The Quireboys – They appear to be one of those bands that probably have the ability to make some people wet at the very mention of their name. They don’t do a massive amount for me personally and as a result, will probably be at another stage when they play. I’d only heard of them before this announcement because Ginger Wildheart used to be in the band (back in the day) and after he got fired, he formed The Wildhearts. Every cloud...

Sylosis – This is one of those bands that I really want to see but have never had the chance. They either clash with someone at a festival who I want to see more. Their UK tour didn’t come close to Portsmouth (which was a real shame considering Malefice were supporting). They are a good band though and this is a good announcement.

Butcher Babies – They sound really quite interesting. Almost like Korn or Biohazard mixed in with Arch Enemy. I’ve only heard the one song but it sounds quite good. The very shallow, male side of me wants to see them having a) seen a picture of the two female lead singers and b) seen a picture of their stage attire (the top half consisting of black tape in places). Musically though, they seem to be very interesting.

The Defiled – I was convinced I’d heard a bit of these guys at a previous festival I’d been to but can’t find their name on any of the reviews. Oh well! They seem pretty good and I am looking forward to seeing them open the night for Skindred in London.

Fozzy – Best band of the booking as far as I’m concerned. Seen them twice and they are just awesome live. They will be watched.

Sebastian Bach – This is a difficult one for me, only because I don’t know anything by him. I know he was in Skid Row but I don’t know what albums he released with them. I also don’t know any of his solo material. Chances are I’ll give him a miss.

Soil – Hey it’s the 2nd ever band I saw at Download 2006, my first festival. They’ve gone from main stage to 3rd stage, which is a little awkward but then their star has slightly faded since 2006 I’d say. They should be good in the little tent.

Red White & Blues – A repeat booking it would seem. They seem alright. Very much a classic rock sort of band.

Upon A Burning Body – OH SWEET LORD NO! They’re a bad band. In which I mean I dislike them quite a lot. I will aim to be very far away from them when they play. Can’t win them all...

While She Sleeps – I quite like what I’ve heard from them, which is a good thing because metalcore/hardcore can be very hit/miss with me.

We Are The Ocean – I saw them at Reading last year and gave them an 8. They are a good live band and given the chance I will see them again.

The Treatment – The Treatment are an absolutely quality band. Fantastic announcement from the Download guys I say.

Marmozets – They seem alright from what I’ve heard.

So that is the announcement in a 1000 word nutshell. Overall I am very positive towards it as it adds more bands I like to the line up while adding bands I won’t dream of seeing, reducing possible clashes. As you can see from the poster though, there is to be some clashes and I have a better idea of who I can and can’t see. One thing which is interesting is there are fewer bands on the main stage on Sat/Sun. I say fewer; there was one more in previous years. I don’t know if more are to be added but if not, I am going to have a guess at stage times from what I know.

Of course these are complete guesses but I think that’ll roughly be what’s going to happen. With my guesses in mind, my plan for the festival so far looks like this:

Saturday – Main stage all day, but making room for Ginger, Fozzy and The Treatment if I can. Hopefully none of them clash with Tenacious D

Amazing line up for me then. Something to keep me busy all day and the whole line up hasn’t been announced yet. Any further announcements really don’t need to contain anything I like and I will still be happy with the line up. In fact, anything more that I like and all of a sudden, I have a clash-tastic problem on my hands.

Excellent announcement Download. Sonisphere apparently have an announcement within the next week. Should be interesting.
Posted by Mike Tyler at Sunday, March 04, 2012