The first observation which I feel needs to be made relates to the venue itself. Before going into the gig, I found out that Manchester Academy 3 is in the Manchester University student union (as is Academy 2 and Club Academy). I also found out the student union is pretty massive! Club Academy (300 cap) is in the basement, Academy 2 is on the 2nd floor (800 cap) and Academy 3 is on the 3rd floor (450 cap). Genius idea if you ask me to have 3 gig venues in one building like that. That would be a great place to have a one day festival of sorts, especially if you utilised the big 2300 cap Academy 1 next door to the union. I assume it is the same for all 3 of the venues in this building, but Academy 3 had a fantastic sound system, something which would prove vital in a gig like this one. When walking into Academy 3, I couldn’t believe I was about to see Dimmu Borgir, arguably the biggest international black metal band, in this very small venue.

This tour was titled “An Evening with Dimmu Borgir” – 2 Dimmu Borgir sets with no support. The first set was a run through of an entire album voted on before the tour by fans and the second being a selection from the Dimmu Borgir back catalogue. The album which won the vote was Enthrone Darkness Triumphant. I voted for a different album personally but was pleased to see this one win. I voted for Puritanical Euphoric Misanthropia because it has the very first Dimmu Borgir song I ever listened to on their, Sympozium. Ah, nostalgia.

The crowd roared with mass approval when the opening notes from Mourning Palace played over the PA. This level of enjoyment remained throughout the entire of the gig. There was a certain sinister atmosphere in the venue, created not only by the music but by the lights and smoke. In between and during songs there was a lot of crowd interaction, with Shagrath wanting to see a lot of horns thrown in the air, something which the crowd had no trouble doing. “Raabjorn Speiler Draugheimens Skodde” was the final song of the first set. Shagrath declared the evening to be a celebration towards the 14 year old Enthrone Darkness Triumphant album, and what a celebration it was. 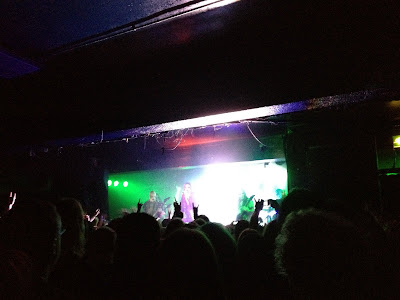 The second set began following a brief interval. It started with a drum solo from Daray which was immense. The rest of the band returned to the stage for Vredesbyrd. Following this, Shagrath said “Left are the kings of the carnival creation, carrying out the echoes of the fallen” to start the next song, which was “Kings of the Carnival Creation” which truly was one of the highlights of the second set. We were treated then to 3 songs from the new album, Abrahadabra - Dimmu Borgir (a song about strength and unity), Ritualist and Gateways. The set then finished with the powerful Puritania. Throughout the material from the new album, Shagrath had demanded mass headbanging which happened slightly. During Puritania, almost every person in the room was banging their head. Dimmu Borgir left the stage but the crowd wanted more. Sure enough they returned and closed the night with The Serpentine Offering and Progenies of the Great Apocalypse, which was a stunning close to this evening. 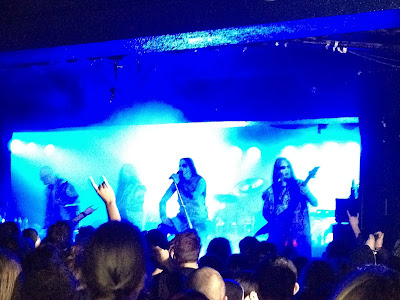 A special night all round with a superb performance and set list from Dimmu Borgir. I really feel this tour has benefited from being in smaller venues. The sheer intensity coming from the band combined with the intimacy of the venue and the almost demonic atmosphere created a stunning show. I will see them again, at Wacken 2012 where they will play with an Orchestra. That has the potential to be even better than this gig, but we shall wait and see.
Posted by Mike Tyler at Sunday, November 27, 2011