The End Of A Laptops Life

This is the first post for this blog that I am typing using my new computer. Same software, just some new hardware. It is with great regret that I announce my old laptop has sprouted wings and flown off to Silicon Heaven (bonus points to you if you get that reference). Well, I say Silicon Heaven; it is actually in its box in my wardrobe. How did this occur, I hear you ask? (Chances are no-one actually asked that, but hell – I’ve got to blog about something other than live music!)

My laptop is about 3 years old I think. It took over the laptop I had before it as the device I used to record episodes of the RRP with Dave (made harder by the fact this laptop ran Vista, and for reasons best known to people other than me, Dave and the software developers, it wouldn’t run my audio editing program). Anyway, after about a year of recording using this laptop, the sound card stopped working. I could have sent my laptop off to be fixed but I was still at University at this time and used my laptop on a very regular basis. Because of this, I decided against it. I had a USB sound card so I could still play music with speakers plugged in. It just meant that the RRP was dead. A real shame as it was a lot of fun to record but there we are.

Aside from the sound card, my laptop was functioning fine until about 6 months ago; I had issues with the screen. Fairly major issue in that when I turned the laptop on, the screen wouldn’t come on. As far as laptops go, that is a fairly major problem. Luckily, my Xbox had also died (the 3 red ring of fail) and I had a spare flat screen monitor. This meant I could plug the screen into my laptop and hey presto, I had a screen for my laptop again (and actually, this was a better screen as well). It was a pain in the arse however as I had to have the laptop lid open at about a 45 degree angle so I could still see the keyboard, but not really block too much of the screen out. It was annoying, but it was better than no laptop.

A broken screen and a dead sound card means the laptop was on its last legs and one more problem would likely finish it off. Thankfully, that blow did not come in the form of a virus it got. Sky Broadband went out for the weekend last weekend in Cosham and in all areas served by the Cosham exchange. As a result, I barely used my laptop at the weekend. However, at one point, the screen stopped showing my desktop, instead replacing it with an image not too far away from the one you’d see if you watched a terrestrial TV channel back in the day up until the time it went off the air. Now, this happened when I was doing NOTHING on the laptop. 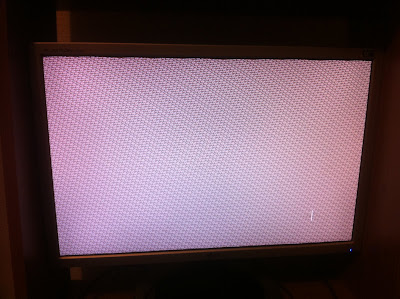 I decided that could not be a good thing, but I decided to leave it and see what happened. When we got the internet back, I started using my laptop more, or at least I tried to. After no more than 30mins use I was greeted by a similar screen to the one pictured above. I turned my computer off and hoped it would go away if I left it off for 10 minutes and switched it back on. When I did this, Windows failed to load. My optimism in the life of my laptop was rapidly dwindling. Another laptop reboot and this time, Windows loaded (which at this stage, I considered a bonus). The laptop seemed to be working fine and so I continued to use it, being careful not to stress it too much by eating up its entire RAM (not that I was sure this was the issue – I just figured it might help). Anyway, in a complete shock move, I was greeted with the screen of fail again. This screen, by the way, confuses the shit out of me. If it was a blue screen, I might be able to do something about it. But being met with a beige collage meant nothing to me, other than perhaps my laptop was from the Neutral Planet (“If I die, tell my wife ‘hello’”). I came to the decision that I couldn’t continue to live with a computer that needs rebooting every 30-60 minutes, and more to the point – not only could I not live with it, I didn’t want to.

However, one thing I also didn’t want to do was spend too much time looking at a new computer to buy. I used to know a lot more about computers and what the components were. Now, I have no clue what processors are good or not. However, I had already decided that if I had to buy a replacement for my laptop, I wasn’t looking for a powerful beast. I just wanted something basic that would allow me to blog, browse, listen to music and watch video. I’m not into gaming anymore (aside from Football Manager) so I didn’t need a powerful graphics card. I also decided that I didn’t need a massive hard drive. It would be nice to have a computer which had a 5TB hard drive, but I don’t need one right now. This purchase had to be on the cheap.

In my mind, I was going to buy either a netbook (with a keyboard and mouse, and plug it into my screen) or buy a tower. I figured that spec wise; a netbook would provide me with everything I need. Although for that price, I would be better served buying a tower. Anyway, I got to PC World and made a discovery about netbooks – they don’t have a CD drive! I dunno why I assumed they would but they don’t. That made the decision so much easier. I feel in the grand scheme of things, I’d be better off buying a computer with a CD drive. So after much deliberation, I chose a fairly basic tower. Dual-core processor, 500 GB hard drive, 3 GB RAM, integrated graphics. It will do the job for me and will hopefully last me quite a while. I took the insurance out on it, which costs £4 a month. If it breaks down 3 times, they’ll give me a new PC. I think that’s a damn fine agreement personally.

And that my friends, is the story of how I got a new laptop. I leave you now on a quote from George Carlin’s “Parental Advisory: Explicit Lyrics” which had me rolling while I was trying to type (ROFLYSST?)

“Frankly I’m not impressed with people who tell me what they’re going to do when they go to the bathroom in the first place. Doesn’t that bother you? People who announce it – ‘I’ll be right back, I’m gonna take a shit” NEVERMIND! Do what you have to do and leave me out of it! And don’t describe it when you come back! ‘Boy you should have seen...’ NEVERMIND! ‘It set off the smoke alarm’ NEVERMIND!”
Posted by Mike Tyler at Wednesday, July 20, 2011