I've done a couple of blogs about Wrestling in the past and as its Wrestlemania, I thought I would write some thoughts as the show is going on. So these are those thoughts. 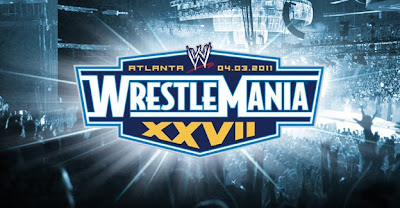 Wrestlemania 27 – live thoughts
• The intro video when I’m watching a live show always brings out the old school wrestling fan in me. Hearing John Cena’s voice though in place of Jim Ross’s...urgh

• “If you smell, what the Rock is cooking!” Already pumped!

• 15mins in and there has been a pretty cool promo, and now a video package about Wrestlemania. Will there be any matches tonight?

• Found out Sheamus/Daniel Bryan was taken off the mania card. Hope that wasn’t to accommodate The Rocks opening promo

• Now that is a fireworks spectacle. Jack Donaghy, take note!

• The first match is for the World Heavyweight Championship? Well that was unexpected

• Del Rio just had the taste slapped out of his mouth! Damn

• Damn, that was an awesome kick. Good work Del Rio.

• Edge retains. Pretty good opening match. Still not sure why it was the opening match but oh well, I’d say about 7/10

• Why did Edge just elbow drop a car?

• It might be slightly more believable that Cody Rhodes’s face was disfigured if his mask wasn’t see-through. Speaking of masks, Rey’s looks silly.

• Damn, some awesome kicks from Rey there.

• Cody Rhodes picks up the win in this one. I would have expected that match to have a faster pace than it did but it was still a good one. 7/10 again I’d say.

• William Regal rapping might be one of the best things ever. The rest of this segment has been pretty wank though. Khali shouldn’t do anything, ever.

• Oh, it finished during the smoke break. Awkward. Well, Big Show won with the knockout punch, so that makes the match worth at least a 4. But that is all!

• Why was Santino on Wrestlemania but not Bryan Danielson? (Daniel Bryan...whatever!)

• A close up of Randy Orton’s eyes in HD was scary.

• Mid air RKO! First real “Holy shit” spot ofmean the night. Randy Orton picks up the win in by far the best match of the night so far. It had almost everything. 9/10

• Mean Gene and Pee Wee Herman! Win! Mean Gene in Cena merch though, not so win.

• Aside from HBK and Sunny, this class of Hall of Fame inductees is pretty weak. Speaking of HBK, here he comes. I’m sad he’s gone from wrestling but glad at the same time that he retired from active competition and stayed retired. Unlike some (*cough*RIC FLAIR*cough*)

• And now for arguably the best match on the card from a pure wrestling stance, Michael Cole vs The King.

• J.R! Good to see him back. Please come back full time!

• Oh for fucks sake! What in the blue....orange hell is Michael Cole wearing!

• I gotta get me one of those Quad bikes. Also, Austin is here! Good times

• Michael Cole is getting his ass kicked! This is one of the best things ever!

• “I thought Michael Cole was going to suck it up once in his life”. I’m sure he’s sucked it more than once...oh wait. BUSINESS!

• Are the crowd chanting boring? They wouldn’t be wrong

• Oh for fucks sake Cole! Don’t get your nipples out!

• Who throws in the towel anymore anyway?

• DO YOU GIVE UP? Austin as a guest referee is awesome

• Jerry The King Lawler wins. Hardly a surprise but nice to see Michael Cole getting his ass kicked.

• Booker T did a spinaroonie and then got stunned. Nice work.

• Jerry Lawler disqualified? Oh man this is lame. Bullshit chants justified. No score for this match now cause that was just bollocks.

• King and JR for the rest of the show? I like this

• Nice bit of Metallica - For Whom The Bell Tolls. I like it.

• HHH is kicking Taker’s ass! It is early days but I didn’t expect that

• Taker flying over the top rope never fails to impress me. Holy shit is right fans

• Belly to belly through the table by HHH! Another Holy Shit!

• Taker just kicked out of a third pedigree! What the shit!

• Fucking hell! Taker has now kicked out after receiving a tombstone and many chair shots.

• And here comes the sledgehammer...

• Hells Gate! And HHH dropping the sledgehammer was symbolic of him losing.

• Undertaker wins! 19-0! I think we all knew realistically this was going to happen but my word what a match. Excellent ending as well. Slapping on Hells Gate out of desperation and forcing HHH to tap. 10/10!

• Taker looked really hurt after that one. Can’t say I’m surprised. Don’t think there was anything kayfabe about him being stretchered out.

• WWE Title match now, and with the champion coming out first, you know that The Miz is not leaving champion. Which means John Cena will. Oh bollocks

• ENOUGH WITH THE JESUS SHIT!

• Mix kicked out of the AA. Then I blinked and apparently missed a few big moves and then there was a double count out. What a shit end.

• And now, the most electrifying move in sports entertainment! To the Miz! Why not?

• That main event was a bit of a cluster fuck, but hey, Cena didn’t leave as Champ, The Rock laid some Smackdown and all is right in the Wrestling world. 5/10. Boring until the Rock came in. True story

• I need some fucking sleep now! Wrestlemania, you were good.

Well, it wasn’t the best Wrestlemania I’ve ever seen but it certainly wasn’t the worst. I think they boobed by not having Sheamus v Daniel Bryan on the card. The match of the night was clearly HHH v Undertaker. Even though we all expect Taker to keep his streak alive at WM, it’s nice to see a match which makes you second guess that thought. I second guessed it a lot and was genuinely happy to see Taker retain the streak (19-0). I don’t understand why the World Heavyweight Championship match was first considering some of the matches that followed it on the card (I’d have put the 8man tag match first or Cody Rhodes v Rey Mysterio). Some of the backstage stuff was funny but some was a real waste of time. Most of the Snoop Dogg segment was a bit shit, but The Rock and Steve Austin meeting was awesome. The main event was boring up to and including the double countout. The Rock restarting the match then costing Cena the title saved it for me, but it was still a bit of a cluster fuck main event. Nice to see The Miz get the People’s Elbow at the end, and I think this sets up The Rock v John Cena at Summerslam. I’m not sure how I feel about that one to be perfectly honest. My main problem with Wrestlemania this year is aside from The Rock at the end, it kind of went out on a whimper. I would have made Undertaker v HHH main event, because it was in my eyes.