I always get a little excited about announcements for festivals I’m going to. While I do like the random announcements that Wacken seems to do – the hyped up announcements that the UK festivals seem to do always excites me. I found out over the last weekend that a Sonisphere announcement was coming this week and I was very happy about that as it had been a while since we had an announcement and the lineup is already looking awesome. The only thing which I wasn’t 100% about was when this week the announcement was coming. I had seen a couple of self confirmations pop up over the last week – both of which I liked as they were good bands. I saw another self confirmation this morning which I loved as it was a band I’ve not seen before. I figured the announcement was coming soon when this morning’s self confirmation happened – and sure enough it was revealed it was coming at 3pm. Before this announcement, I found out the sad news that Devildriver are no longer playing Wacken as they are planning to tour the US during this time. I can’t say I overly like this excuse but I did wonder why they had seemingly not booked any other euro festival spots (Trivium haven’t, but they are a Euro festival exclusive for Wacken – Devildriver didn’t seem to be a euro exclusive). A shame, but no matter – the chance to see them will come again I’m sure. Hopefully they’ll come to Portsmouth or Southampton on their next UK tour – we’ll see. Anyway, this is about Sonisphere and bands that are playing, not Wacken and bands that aren’t. 3pm rolled around, and I was amazed once again – not only at how good Sonisphere was, but how it managed to improve with each lineup. Anyway, the bands that were announced are:

Bad Religion – Pretty good announcement. Don’t know much by them, but I like what I’ve heard.

Cavalera Conspiracy – Win! I’ve wanted to see these guys live as I liked their first album. I missed them at RaR08 so I could get a spot for RATM. I think that’s what happened anyway. Still, genius announcement.

Sylosis – Impressive to see these guys on the main stage having seen them be announced for smaller stages so far. Will definitely check them out if there is not a clash.

Richard Cheese & Lounge Against the Machine – What an announcement! The last two years I’ve not really cared for the “novelty” announcement, but this is superb (I don’t know if this is considered the novelty announcement but for me it is). I really want to see Richard Cheese live so this will be a treat.

The Answer – Big announcement from Sonisphere. Surprised they aren’t on one of the open air stages but no problem. If there is no clash then I’ll be watching them.

Cancer Bats – Awesome announcement. Love this band and really want to see them live again. If the chance arises, I shall.

My Passion – They aren’t for me truthfully. But liking every band at a festival would be a nightmare!

Kylesa – They sound fairly decent. Don’t think I’ll get the chance to see them if the poster is right though as they’d be clashing with Volbeat. A shame, but no matter

Pulled Apart By Horses – These guys seem really quite good. Hopefully will be able to get to see these guys.

Hayseed Dixie – Fantastic announcement. I see they are playing on the Friday and I hope they are not clashing with Metallica as that would just suck. But I definitely want to see them again.

Paradise Lost – Were genius when they opened the Saturn stage on the Sunday of 2009. Really enjoyed their set and will strive to see them again this year if time allows.

Rolo Tomassi – Not bad at all. Probably will give them a miss at the festival but if there is nothing on when they are on, then I’d go check them out.

Me Vs Hero – They seem pretty good. I’m sure they are supporting Skindred though so I’ll probably catch them there.

Amplifier – They seem alright. Not all that bothered about seeing them though.

Demonic Ressurection – Seem pretty good. Will try to catch if the time allows.

Orange Goblin – Brilliant band who I’ve managed to miss live so many times. I must try to see them at least once. Maybe this’ll be my chance? Who knows!

Saint Jude – They seem pretty good. Wouldn’t mind checking them out if I had nothing to do.

Hounds – Don’t think they are on Spotify. On a side note, there are a lot of backing bands who use the name Hounds!

The Crave – They seem pretty good.

The Virgin Marys – They don’t personally do a lot for me.

So out of that entire list, there are only 2 really who I wouldn’t bother going to see if time allowed. There are quite a few (at the smaller end) who I’ve never heard of who I’d go and see if time allows. Such is the way of a festival like Sonisphere – sometimes time will allow and sometimes it won’t. That isn’t always such a bad thing. Anyway, this announcement wasn’t all about the bands – it was also about some stage splits. By my estimations, the main stages look full now. Actually, if last year’s poster is anything to go by, there are a couple more bands on the main stage this year than last. I’m ok with that. Anyway, here is the new look poster. 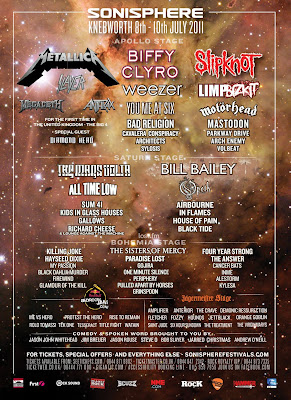 Sonisphere looks awesome this year. Everyone has their own personal tastes when it comes to music and once again, Sonisphere has covered almost every area of my music tastes with this festival. I’m not sure how many more bands are to be announced but if someone who ran the festival turned round tomorrow and said “unless someone pulls out, this is it” then I’d be more than happy with the fact I have a ticket to this festival. What I am going to do now is look at the day splits and list the bands I would see or would like to see on each day.

Not many bands there but there aren’t that many playing on the Friday by the looks. And truthfully, I’m not that bothered about there being too many great bands on the Friday because I’d like to see all the Big Four. I do want to see Hayseed though, so if they clash with anyone other than Metallica, I have a tough choice to make.

Might be quite surprising to see me put Biffy Clyro in that list considering I have openly said I’m not bothered about seeing them. Truthfully, I’m not – they are supporting Foo Fighters the week before Sonisphere and I will see them then. Anyway, if there is nothing else on which takes my fancy then I will see Biffy. I’m hoping I’ll be able to see all of these bands but realistically, I’m going to have to make some tough clash decisions.

Sunday is the band heavy day for me. There is a lot that I want to see and I’m hoping the stage times will work out so I can see all that I have to see. Really the main 3 bands for me on Sunday are Slipknot, Volbeat and Fozzy. I’m hoping that none of those 3 clash with each other (and obviously Volbeat and Slipknot won’t) otherwise I’ll be fuming!

Not a great lot of bands there but I’m expecting that list to get bigger with more bands being announced for the two smaller outdoor stages plus the addition (if it is here this year) of the Strongbow Bowtime Bar Stage. Plenty more to get excited about when it comes to Sonisphere 2011. I’m just really happy I have a ticket and cannot wait to go back to Knebworth for another weekend of awesomeness it would seem.