Without one major theme for this blog today, I decided to call it Easter Sunday Musings. There is no discussion about Chocolate, Religion or even rabbits, so the title might be slightly dishonest. Small bits about a few things that are going on or have been going on.

Yesterday was an awesome day. I booked tickets a while ago for the St. Georges Day game of Rugby at Twickenham. The game was London Wasps v Bath Rugby. I decided to go to this for two reasons – the first being that the first game of rugby that I went to watch was Bath and secondly, I wanted to go watch another game at Twickenham. Travelling up to London on a nice day is always a bonus although when we got into London the climate (so to speak) changed from nice and warm to muggy. Getting to Twickenham is a piece of piss really from Waterloo. I haven’t gone to Twickenham via train since 2008 when I went to see Iron Maiden there. This was different however as the crowd arrived for the Maiden gig in drips and drabs (if memory serves – I don’t remember it being that busy) but yesterday there were massive crowds all walking with the same purpose – to enjoy a game of Rugby in the sun. One thing I love about Rugby is mixing fans. As we walked into the stadium, we engaged in a bit of banter with a Wasps fan, which was all fun. Try doing that at a football game and you’ll likely be picking your teeth off the floor – why is that? Anyway, the view from the seats was rather good (made even better somehow knowing that the tickets with booking fees cost about £17.50). 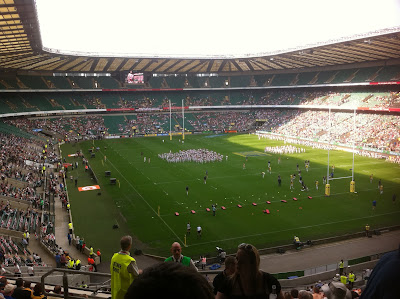 Reading the programme on the way home was quite entertaining as it made reference to last year’s St. Georges Day game where Bath won 35-19 and how that was a massive blow to the team. If that was a massive blow, then I hate to think what yesterday’s game will do to the London Wasps. Bath started off really well and got a try within the 4th minute. A conversion just after and Bath were 7-0 up really early. I’m not going to discuss all the points in detail (there are match reports for that) but at half time, Bath went in 29-3 up which is a commanding half time lead. There was a bit of controversy over one of the second half try’s for Bath (which required the use of the video ref). It was given as a try but I’m pretty certain that it was not, Dave was pretty certain that it wasn’t a try and the Wasps fans around us were in disbelief it was given. Another example of opposition fans just chatting about a decision in the game without reverting to calling the referee, or each other, wankers. Quite nice really. The final score was 43-10. As a side note, the try that London Wasps scored was immense (run from the half way line to score). Great game and Bath were the deserved winners I think. Really glad I decided to go to the game and I can’t wait to go back on the 28th May for the Aviva Premiership Final. With any luck, Bath will be there but I’m not that hopeful.

Speaking of rugby, I have been debating whether to try and go watch Bath one more time this season at their home ground. Every time I’ve looked, tickets have sold out really fast so I promised myself if I had the chance this season, I’d do all I could to go. Sure enough that chance arrived for the game on the 7th May. Now, I already have plans for the evening of the 7th May in Southampton (going to see Ginger, the front-man of The Wildhearts, do an acoustic set). So the day will involve a jaunt from home to Bath Spa station. I’m reliably informed the Recreation ground is pretty close to the station, and I hope that this is true. After the game I’m off to get a train from Bath to Romsey. Romsey is a grim place if memory serves. I seem to recall it’s like Petersfield. Anyway, change in Romsey to get to the Talking Heads, and then the gig. Trying to work out whether wearing a Bath Rugby shirt that day is a good idea or not – it’s quite a thick shirt and that could be a bad move for a gig. Anyway, I’m seeing two more games of rugby this season and I cannot wait. I honestly think I’ll probably go and watch Bath more next season than I will Pompey – unless Bath raises their prices as well and then I’ll just be pissed off!

It wouldn’t really be a blog on this website without some form of mention about live music. This Easter weekend of fun continues with a gig tonight at the Wedgewood Rooms to support the cause of Diabetes. I have friends who play in The Founders Of and Toxic Shock, both of whom are playing tonight. There is a headline band called Hairforce 5, but I know nothing of them. Tempted truthfully to give them a miss and just head home. Saves money that way and also will mean I won’t have a hangover on my bank holiday Monday. Speaking of gigs at the Wedgewood Rooms though, Skindred who were due to play the Pyramids in Portsmouth have had their gig moved to the Wedgewood Rooms. That does surprise me as I’d have thought they’d have no trouble selling out Pyramids but the fact they sold less than 400 (which it had to be for it to be moved to the Wedge) is quite surprising. However, I’m really happy about the move as in 2010, Skindred were awesome at the Wedge and I can’t wait to see them destroy the dancefloor there again.

Since my last blog, I have purchased Football Manager 2011. I never realised how much I missed playing a game of some description until I bought this game. My Xbox went down quite a long time ago and instead of getting it fixed – I accepted it was unlikely to survive much longer after getting fixed and so I gave up on it. Playing FM2011 has been fun and after a few shit starts to seasons, I’ve created a game where I am managing Tottenham and have lead them to two Premiership titles, an FA Cup, League Cup, Community Shield and Final/Semi-Final of the Champions League. It is a lot of fun to chop and change the squad, in preparation for another assault on the biggest European prize. In fact, once I have finished writing this, I will be heading back virtual sheepskin jacket and dugout. Although it is pre-season at the moment so probably not so much of the dugout.

Finally, is anyone else fucking sick of this debate over AV? I just wanted to express my apathy with both sides of the campaign. Yes to AV people are just attacking the Conservatives (and other supporters) and likening them to the BNP and Communist Party’s (strange how they can be like both of those parties) and the No to AV people are arguing about the cost. It is such a shit argument from both campaigns. The main argument for AV as far as I can see is the eventual winner of a vote must receive 50% of the votes in their constituency. The main argument for First Past The Post is that the candidate who wins the most votes in a constituency wins. Why people needed to resort to cheap arguments to get their point across is beyond me (although not uncommon in politics sadly). The advert for the No to AV campaign with the horse race was very simplistic but it worked. I think I am voting No to AV but that’s because I don’t see how changing the voting system will really benefit the country. If there are constituencies that are safe seats under FPTP, then chances are they probably still will be pretty safe under AV. It is only the swing voter seats that make things interesting under an AV system, but then they also can make things interesting under a FPTP system. I just don’t see how someone can claim they won 50% of the vote if they had to rely on 2nd choice votes to get past the 50% mark. I also think it is interesting that no-one has mentioned that regardless of the voting system, there are still about 30% of the voting population that don’t vote, sometimes more. No-one is talking about how to reach out to these people but how to make the layout of parliament ever so slightly more representative of the voting population. Just as a side note, I think it is hilarious that there are members of the Labour party strongly behind the Yes to AV campaign. In their 1997 manifesto, they promised proportional representation which obviously never materialised when they won the majority that they did. They then had 13 years to introduce a change to the voting system, yet somehow never found the time. Now they are out of power, FPTP is undemocratic and awful, and the Conservatives support of it just proves they are outdated as a party...really?! That’s just embarrassing, Labour.

Also, I just saw this picture about AV which made me chuckle:

That’s all I have for this one. Like I said at the top, bits and bobs. No real main topic but sometimes it’s hard to find a topic worth writing about (or a topic that I can write about well enough to do it justice). I will probably post a blog soon with reviews of tonight’s charity gig as well as Skindred. After that it will probably be after May 7th, with stories of the day of win and the election/referendum. It’s all over soon!
Posted by Mike Tyler at Sunday, April 24, 2011