So, Sonisphere have announced a new batch of bands since I last posted an audioboo talking about the festival. I will talk about the shape of the festival now following this announcement with an opinion on how the day splits look, and concerns over the conclusion to the Saturday. The announcement was a mixed bag for me this time, but that is not a bad thing. Some people expect to like every band that is announced for a festival but for me that is a foolish viewpoint. When I go to a festival, I want to see as many bands (or comics in Soni's case) as possible. The last thing I want is to miss bands I like because they are clashing with other bands I like. Now, thinking back to Sonisphere 2010 – there were only two clashes for me which really annoyed me – Evile/Lacuna Coil and Motley Crue/Earthtone9. Thinking forward to Wacken 2011, I am really not looking forward to the times coming out because I’d quite happily watch at least 75-80% of the bands announced. Seeing as that won’t be possible, I’ve got decisions to make. Anyway, slight side track there – the Sonisphere announcement is:

Mars Volta – “What’s this? A doorknob? Good show!” That’s my way of saying going to a door knob museum would likely be more interesting than seeing Mars Volta live. I’ll hopefully wander off and see another band in Bohemia or something when they are playing. Shame they are headlining the 2nd stage by the looks on the Saturday. I’ll speak more about that later.

Opeth – Pretty strong announcement for Sonisphere I feel. I truthfully didn’t think much of them at Rock Am Ring and it was raining and miserable when they played at Wacken which soured my mood somewhat. But their set supporting Dream Theater at Wembley was awesome, so I’m hoping we get another great performance like that this time around. Excellent stuff

Black Tide – I’m not sure what to think of this announcement. They released a pretty good debut album and destroyed the tent at Rock AM Ring (I remember giving them a 10/10 rating at the time) and then they played Reading and dear god, they were wank. Maybe it was the fact we were actually outside the tent, but it still didn’t sound good. Anyway, if no-one else is on then I’ll give them a listen.

Killing Joke – Reasonable announcement. They played the main stage in 2009 to a criminally small crowd (I’m informed, I listened more than watched). They are playing the Bohemia stage this time at midnight, after the Big Four have finished. That could be a squeeze getting into the tent (especially as I intend to be near the front for Metallica). But if I can get into the tent and watch them, I will.

Alestorm – Pretty decent announcement. Will endeavour to watch if there isn’t a clash with someone else. I’ve not seen them since they released their last album either so seeing some of the stuff from the 2nd album should be good.

Firewind – Same as Alestorm really. Will watch if there is no clash although I’ve not seen them before and I’ve always thought I’d like to.

Watain – Black Metal at Sonisphere, well now isn’t that a thing? Also, they are pretty good. Will watch if there is not a clash with anyone else.

Rise To Remain – I still don’t care for this band, and they’ve been at Sonisphere every year now! (I’m choosing to ignore the fact that Anthrax have as well, don’t judge me!)

Six Hour Sundown – No idea! Can’t find music on Spotify and I try to avoid MySpace if humanely possible.

The Treatment – Their first EP made me think “wait what?” but their 2nd release was pretty damn good. In fact, it could well be a different band as the logos are very different. Whatever, they sound good and if there is no clash again, then they will get a watch.

So a reasonable announcement with Opeth being the highlight for me. The lineup is starting to take shape now and the days have split a little bit so I’m going to have a look at where bands are playing and if that works for me. 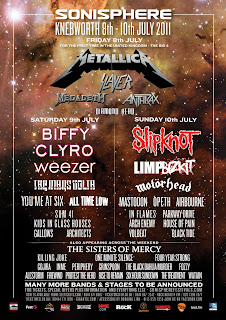 Friday – Well, not a great deal to say about what we know about the Friday at the moment. We have the Big 4 + Diamond Head playing the main stage, with Killing Joke playing the Bohemia stage afterwards. Looking at other bands on the lineup, I wish they’d make Friday a full day and put Volbeat on the main stage after Diamond Head, but you can’t have everything. That Friday will be awesome. Sorry Bohemia, but you’ll have to pull out something amazing for me to miss any of the 5 bands on main stage this day.

Saturday – Again, I’ll talk more about the conclusion of the Saturday later. There isn’t a great deal of bands on the two main stages on Saturday that I’ll be watching. So far it will be All Time Low, Sum 41, Gallows and perhaps Architects. Now, I know more bands will be announced for the stages for Saturday, but I’m ok with not hanging out by the main stages because it’ll give me a perfect chance to check out the comedy (if there is any) and some of the Bohemia/other stage bands announced. To be perfectly honest, of those bands I just listed, I’m only definitely wanting to see Sum 41 and Gallows – I haven’t seen them and I really want to.

Sunday – Please let Fozzy clash with Mastodon! Ahem, not surprised with most of the bands that are playing this day. Black Tide looking like they might be on one of the big stages surprises me but them playing this day doesn’t shock me. Volbeat fit in here nicely but them being so low saddens me. Hope they get 45mins or so on stage. House of Pain I am surprised to see here. I thought they’d have played the Saturday. There are no other shocks here. There are a few I’m prepared to miss in favour of seeing Fozzy but Volbeat and Slipknot are the only two that would win the clash. Seen Limp Bizkit, Opeth, Airbourne and Arch Enemy before. Would like to see House of Pain and I don’t overly care for In Flames and Mastodon. The top of the day looks pretty immense, and the only time in my Sonisphere attending history that I’ll see a main stage sub-headliner, then the 2nd stage headliner, then the main stage headliner. But Limp Bizkit (Sub), Motorhead (2nd Head) and Slipknot (Main Head) is a dominating close to a festival and I cannot wait. If I have to miss Motorhead though, I will because they are playing Wacken, so I’ll endeavour to see them there. Superb day by the looks.

Other bands playing – I’d guess based on poster positions (although at this stage that doesn’t really mean a lot) that Sisters of Mercy have a major spot in Bohemia, possibly the headliner. I’d like to see the other 3 main bands there, Killing Joke, One Minute Silence and Four Year Strong. Other than that, there are 4/5 bands who I’d consider must see at this stage. But as times are released and we know more about the festival, this might change. I am excited for future announcements and further news on what is quickly becoming the best rock festival in the UK (in my humble opinion).

I fear I am about to be accused of being “metulz” or something of the like for this opinion, but I can’t help but have concerns at this stage for the conclusion of the Saturday. I’ve discussed the Biffy Clyro headline situation and I still maintain they are probably headlining the wrong festival. If they were to be announced to headline one of the days of Reading/Leeds/TITP then fair enough. I would have thought that would suit them more, which is why I was surprised to see them be announced as Sonisphere headliners. Even more surprised because the week before they play Sonisphere, they are supporting Foo Fighters. I am of the view now though that a festival promoter has one of the worst jobs in the world because with every booking, you will piss off someone. Almost like a comedian with jokes in some respects (it will always offend someone). Anyway, the promoter of Sonisphere has been very brave in my opinion by booking Biffy to headline – but at least he has taken steps in creating another main stage headliner for UK festivals. Download have tried (and in some respects, failed) to do this which proves that it is a risky move. I could list bands like Feeder, Lostprophets, and Offspring as examples of this. Bands like this headline and people scream and shout that they aren’t headliner material. But then a festival takes a safe route and books someone like Linkin Park to headline (a headliner in everyone’s eyes I’d have thought) and the promoter gets screamed at for not giving new bands a chance. You cannot win!

However, while I respect the decision of the Sonisphere booker to try and create another headliner-material band by booking Biffy Clyro to that position, I can’t claim to be overly enamoured with the conclusion on the main stages to be The Mars Volta on the 2nd Stage and then Biffy Clyro on the Main Stage. Now, my reasoning for this is simple – I’m seeing Biffy the week before in a support slot when the Foo Fighters play and I don’t like Mars Volta. I am not attacking the festival for these bookings; it just isn’t to my taste. However at this early stage where we don’t know what else is going on, I find myself concerned that for the first time since going to a festival, I will end up in the campsite without seeing a band who I consider my headliner for the day (no disrespect to Weezer, but they don’t fit the headliner slot in my mind). Now, if One Minute Silence plays after Biffy then I might watch half that set then head to the tent for OMS. I guess this view is formed due to a lack of knowledge of the rest of the lineup and stage times, which I will have to wait for. I just hope there is a good alternative on one of the various little stages. I guess this is the first time since going to Sonisphere that there hasn’t been something I’ve wanted to watch to close the day on one of the main stages – so in many respects my music tastes have definitely been spoiled in the past and are this year with the Friday and Sunday. Shall see what happens with future announcements and such, but I am still super excited about this festival and can’t wait to go back to Knebworth for the 3rd year in a row!
Posted by Mike Tyler at Sunday, March 20, 2011

you havent mentioned weezer on the saturday, and tbh, if u dont want to see weezer, then sir, im afraid you have dick cancer lol :P

Weezer will be awesome. And will be my main stage headliner that day I presume