Yesterday I went up to London for the NME Big Gig 2011. Now, despite the fact this is the name of the gig – for me it was all about the fact that Foo Fighters were playing. The other bands were Cee Lo Green, Band of Horses and No Age. I decided before the gig that I definitely wanted to see Cee Lo, as I liked the song Forget/Fuck You (both versions are good). I knew nothing about the other two bands but after a quick Spotify, I realised they were not for me. But truth be told, it could be a homeless man playing a washboard while running around a cat (actually that might have been more entertaining than Band of Horses); this gig for me was all about Foo Fighters. This gig came with a slight bit of confusion regarding the ticket orders I made but at this point I would just like to say, I got awesome customer service from Seetickets and would recommend them to anyone (though contact them via Twitter – it gets shit done!) Got a lift up to London with someone from work which I am very grateful for. I am now also aware of a little car park in Wembley which is pretty good! 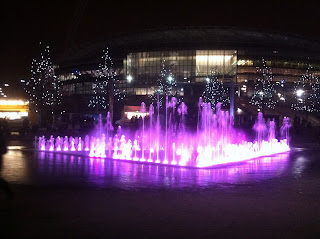 So got to the venue and already there was a difference between this visit to Wembley Arena and the last visit – the amount of people smoking. Last time I was at Wembley was for Dream Theater in 2009 and when I went out for a smoke, there were maybe 20 people outside. This time there were a couple hundred at least. Wembley had their floor fountain on as well which was pretty cool to watch but what was more entertaining was watching kids run through the fountain, come out the other side wet and be surprised by this fact. Would they be surprised getting wet in the shower? This is going down a tangent. Anyway! I didn’t want to head onto the floor too early but there is a lack of things to do at Wembley Arena without spending a large amount of money unless you smoke. I feel like I’ve cleaned my lungs with a cheese grater this morning.

Ok so I heard the last Band of Horses song before they went off stage and I really made the right call by not going in. Studio wise they aren’t for me – live they aren’t for me and louder! I actually think if it was a group of horses playing instruments I would have preferred it. I heard pretty loud music still playing though and wondered if they actually went off stage. I went down on to the floor to find out and it was Zane Lowe DJing! (Note – I didn’t know right away it was Zane Lowe and a follower on Twitter helped me out with that one). He was great at keeping the crowd warmed up between bands and created a real party atmosphere. Cee Lo Green came out and was slightly rockier than I imagined he would be. Granted, I have only ever heard Forget/Fuck You so that might be why I thought that. Still, he was really good. I feel somewhat embarrassed to admit I thought he did a great cover of Gnarls Barkley – Crazy. Now, it’s not embarrassing to think that. What is embarrassing is that he was part of the duo that made up Gnarls Barkley. So, he did Crazy well and hey, I’ve now seen one half of Gnarls Barkley! (That a thing?) After some more DJing from Zane Lowe, it was time for the Foo Fighters. 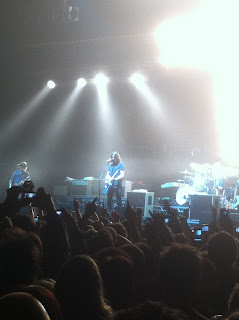 Wow! They are an immense live band. Everything about this gig was almost perfect. The setlist was:

That is essentially a perfect Foo Fighters setlist for me and we got some new material thrown in which is very good. Dave Grohl is definitely one of the best front men I’ve ever seen live and Foo Fighters are now one of the best bands I’ve seen live. I would love to sit down and work out what is the best gig I’ve been to but it would take ages and I know I’d second guess myself over the final choice. 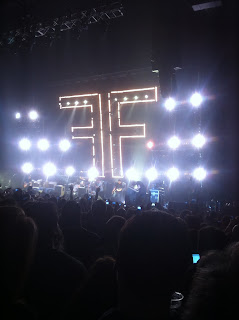 I will be blogging again soon talking about inflated prices at gig venues. Things I saw yesterday were incredible in a bad way when it came to prices.
Posted by Mike Tyler at Saturday, February 26, 2011