Haven’t blogged for a while because I didn’t really feel like I had a great deal to say. I experimented with the short blog format and it is fine although it does mean multiple posts when I have a fair bit to say. Having said that, this post will just be about live music. I did some slight tidying of the blog just to make it look a bit nicer. Got rid of the twitter sidebar as it was too big for the blog (and it was the official design, go figure!) but replaced it with links of my social network locations and a few links to other blogs and web pages. If you want a link adding then all you have to do is ask – there are very few reasons why I wouldn’t put a link there. Moving on, I will be doing a reviewing blog soon covering the next fortnight of activities including seeing John Bishop, Hatebreed and Ginger & Friends. Looking forward to these, although truth be told I have lost a fair bit of excitement about Hatebreed. I reckon that is down to it being the first gig since March that I’d be going alone to.

Speaking of live music, we are well and truly into the first festival season now with several of them making their first announcements. How I tend to view festivals is look at home first and then look abroad. I legitimately consider 3 English festivals before looking elsewhere which are Isle of Wight (IOW), Download and Sonisphere (of those three, Sonisphere is the one I’ve been to the last two years). IOW drew first blood by announcing Kings of Leon, Kasabian, Foo Fighters and Pulp as the first four major bands for its main stage and Tom Jones as its first main act for its “big top” stage. Now, I’m going to see Foo Fighters (this will come up again later) so that is not a massive draw for me. Kings of Leon and Kasabian have a handful of good songs between them but as festival headliners, no thanks. Pulp are the biggest draw for me here and they are playing the same day as Foo Fighters by the looks of things – so if a day ticket becomes available then I might consider it but I don’t think IOW sells day tickets. Download then struck gold really for me. 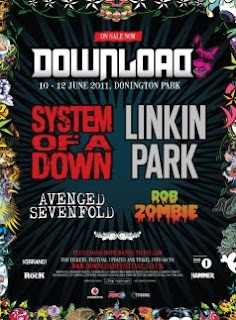 Striking gold in this context means announcing System of a Down to play your festival. A very brief history of what this means to me is that SOAD are one of my bucket list bands (a very short list now) so the chance to see this band – immense! They also announced Avenged sevenfold for their festival. Well I guess they have to appeal to....I got nothing. Anyway, I feel that was a pretty strong announcement for their first one. Their second announcement for me was a bit lacklustre – Linkin Park (to headline) and Rob Zombie. LP do sod all for me because they had two immense albums, disappeared, and then came back with two very shit albums. Hey, they sell out the o2 arena so what do I know right? ;) Anyway! Rob Zombie is one I’m not fussed about; really due to lack of knowledge and lack of interest to change that so I guess not being excited about that one is my own fault but whatever. One awesome band and some serious meh as far as I’m concerned. Let’s see what Sonisphere did...

SLIPKNOT?! Now that was unexpected. I achieved my aim of seeing them live in 2008 but like any greedy person, wanted to see them again! When I heard the news Paul Gray died, I thought the chance to see them had gone and I was just grateful that I was able to see them the one time! This announcement to me is bigger than SOAD. I knew SOAD would eventually one day come back but Slipknot I thought were done. I said many a time following this announcement that it sold me on Sonisphere because it was huge and I’d just go to see SOAD in Paris, or get a ticket or even (as this isnt a reunion, just a "hey, the hiatus is over" tour,) wait for more dates. Well anyways, then Sonisphere shocked everyone with this announcement and not in a good way (in my humble opinion)...

Say what?! Biffy Clyro are a rock band and have every right to play a rock festival but to headline?! What world are we living in? There is no way they are big enough to headline a festival with such crossover appeal. I might get some shit for that but this is my opinion. This announcement has made me want to look elsewhere for my summer festival choice. You will hear people say “a headliner doesn’t make a festival” which at any other festival, I could agree with. However, at Sonisphere they have a rotation system between Main and 2nd stage so between those two stages at least, there are no clashes. This means that when Biffy is on, there is no alternative. Furthermore, Biffy Clyro are headlining a major festival for the first time on the 9th July 2011. Lets hope they don't do anything stupid and say, support another festival headliner the weekend before in the UK.... 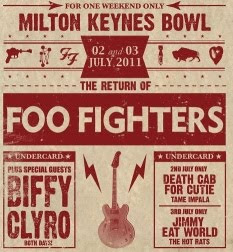 Oh wait, oops! So Sonisphere's main band for the Saturday is a band that the weekend before are supporting another band who are on the circuit headlining? Poor form. Anyway, enough moaning; let’s look elsewhere shall we?

European festivals, how nice and cheap you are! Rock AM Ring is always the first place I look. I think anywhere I see Metallica I will look upon favourably. This festival announced as its headliners SOAD (win), Kings of Leon (feck) and Coldplay (big announcement but not a draw for me as a headliner). No matter I’ll look at Wacken. Hey, Wacken has an awesome lineup at the moment. This lineup includes Ozzy Osbourne, Judas Priest, Airbourne, Hayseed Dixie, Sepultura, Trivium and others. Pretty good other bands as well. Problem with that festival is that is 130 euro ticket which is about 150 after fees and postage (still much cheaper than anything the UK has to offer) but a £168 flight – ouch. That basically rules that out. One I have looked at a great deal many years in a row is Graspop. Let’s have a look at that shall we kids? 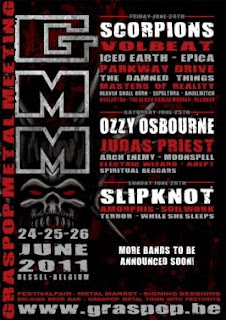 Now, that is a pretty nice lineup. It has Slipknot (which instantly puts it up there with Sonisphere), Ozzy Osbourne, Scorpions, Judas Priest....well you can see the poster. I will draw special attention to the fact that it has Volbeat. Now, it is awesome to see that Volbeat are on the tour cycle again next summer and that it is in Europe is an extra special win. So this festival has winning me over in that it has strong headliners (although in my ignorance, I only know “Rock You like a Hurricane” by Scorpions) and a fairly strong undercard. Excellent if you ask me.

Ok so what are the findings of this set of ramblings? Let’s analyse shall we?

IOW – Saturday is win, but they don’t do day tickets and the other headliners don’t do it for me. For my 5th festival year, I’m going to pass over the local festival.

Download – SOAD is win. The rest so far is not. I might be tempted to come up for SOAD but other than that, not so good. Early days though and I might still pop up to Donington for the first time since 2007 to see SOAD. We shall see.

Sonisphere – “Why do you build me up, buttercup baby just to let me down?” Well there literally couldn’t have been a more gay way to analyse a festival without actually typing that sentence with a cock in my mouth. Anyway, Slipknot announcement is win but the Biffy Clyro to headline one is bemusing. There is one more headliner to announce and unless it is something which makes me go “wow, ok!” then I’ll pass thanks. I have publicly said to friends that the Big 4 (Metallica, Slayer, Megadeth, Anthrax) would do it for me but there are two others being honest that would do it, and they are Led Zeppelin (well, a man can dream!), Faith No More, Green Day and/or Muse - one of them would get me to Knebworth next year.

Graspop – Strong headliners as far as I am concerned. Slipknot and Ozzy are big names. Scorpions I’m told are awesome live and the undercard is immense so far (Volbeat and Judas Priest, yay!) This is at present in the pole position for me to go to it – but I am giving Sonisphere one more chance. If they don’t announce a headliner I want – I’m coming to Belgium! There are a couple of bands playing a rival festival (which doesn’t have enough to sell me) whom I’d love to see announced for this festival, Kreator being one of them!

Well this was a ramble and a half! The next post which will probably be fairly soon as I’ve finished work for xmas now and this will be a more current events blog. Until then!

Soundtrack of the Blog – Well for the most part it was Biffy Clyro. They are alright at best.
Posted by Mike Tyler at Sunday, December 12, 2010