I saw that the touring package of Behemoth, At The Gates and Wolves In The Throne Room (WITTR) were touring the USA and I remember thinking that it would be lovely if that would come to the UK. However, my hopes were low as the USA does get some insane touring bills which sadly never make their way here. Imagine my surprise and delight when I was wrong, and this exact touring package would travel round Europe together. The biggest surprises for me about this tour was the price (and how remarkably affordable it was) and the fact it would take place at the O2 Forum. If pressed, I would have thought they might try and hold this at Brixton. At The Gates had a headline show at the same venue in 2014, so I recall also being surprised they were now a support band in the same room (I do recall though it not being the busiest gig I’ve ever been to there). No complaints from me though, because for the most part, I like the Forum. My thoughts about the tour bill before the gig was love heart eyes emoji towards At The Gates, very much looking forward to seeing Behemoth (after seeing them once before at Wacken 2014) and also WITTR were there. I feel as though I should add that I recall trying to get into them some time ago and failing. I tried again before this gig – and failed again.

Looking at what time the doors opened, I felt confident that by leaving the hotel when I did, I would avoid seeing the band I wasn’t fussed about seeing. However, this confidence was dashed when I saw the size of the queue when I turned up. It was either that they hadn’t come on stage yet, or this was a repeat of when Slipknot played Wembley (and seemingly, about 75% of the crowd turned up after King 810). I got in as WITTR had not long started their first song and thought as I was there, I’d give them a chance. On reflection, I am glad I did so because I enjoyed them much more live than I did when listening to them on Spotify. I’m not sure I will go back and listen to them again, but I feared the worst when I realised I hadn’t missed them, and these fears were unfounded.

At The Gates…are bloody great. I’d seen them twice before this night – most recently on the earlier mentioned headline show in 2014 and on their first reunion tour at Wacken 2008. Fun fact, they were a part of one of the best festival runs I’ve ever been at – As I Lay Dying (awkward…but true), Carcass, Killswitch Engage, At The Gates, Nightwish and Kreator. Also, revisiting that running order, I realised I missed Hatebreed for Obituary – I’m sure I had my reasons but if making that choice today, it would be the other way around. Anyway, before going down that rabbit hole any further, At The Gates! They had 40 minutes and they made the absolute most of that time – they were superb. There was very little hanging around between songs aside from for the two/three times Tomas Lindberg talked to the crowd which I really liked. I remember thinking that if I was giving this set a festival score, it would have been a solid 9 out of 10. The one thing I really like about At The Gates at the moment is that they played 12 songs in this set, and 8 came from albums they have released since reuniting. Sure, it would have been nice to hear more from their earlier albums (no Under A Serpent Sun…), but it is nice to see a band have such faith in their post reunion material (and as well they should, because both albums are excellent). I am hopeful that At The Gates will announce a November/December headline run in the UK. Off the back of this set, I would go. 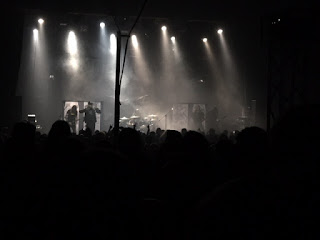 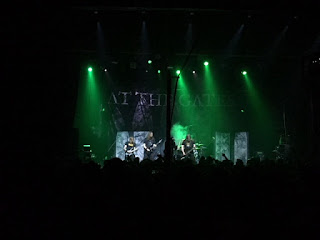 Since getting into Behemoth, I haven’t had many chances to see them live. The big regret was not going to Bloodstock in 2016 and seeing them perform The Satanist in full as that is my favourite album of theirs (and currently what I’m listening to as I type). I also missed then at Download 2014, but they were on stage at the same time as Linkin Park were playing Hybrid Theory in full and that album was instrumental into getting me into metal in the first place. Wonder if there are many people in hindsight annoyed about that clash? Probably not. Anyway, I saw them at Wacken 2014 and I remember them being great, but they were on in the middle of the afternoon/early evening when it was very warm, and that is not the ideal setting for blackened death metal really. I reckon it would be immense if they played as the sun would set there. Because of this, I was very much looking forward to seeing them indoors. 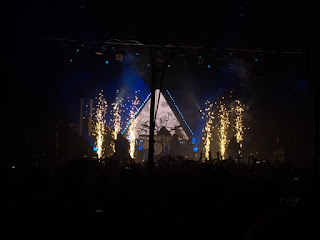 They set the stage up and then put up a curtain to block out the stage, which seemed odd until they used a projector to project an image of a massive upside down cross over an outline of the UK, which was cool. The stage show itself was great, with smoke cannons set up to shoot out upside down crosses, a bit of pyro and some cool lighting. Shout out to the mic stands as well, which looked like mini altars, superb. Setlist wise, they unsurprisingly leaned heavily on their new album (5 of out 14 played came from it) with songs from 4 of their other albums making up the rest. I would have liked for more from The Satanist but I wasn’t disappointed that there were only 2 songs from that album in the set. The set was unrelentingly heavy, to the point that by the end it was like having my ears and body assaulted in the best possible way (aside from the aching back from standing – I’m rapidly coming around to seating at some gigs). I think it is that reason why I was fine with the headline set being 70 minutes long. Sure, a longer set would have been cool, but I didn’t leave feeling short changed at all. Set list highlights for me were:

1)      The opening of Wolves ov Siberia, cause that song rocks
2)      Ora Pro Nobis Lucifier, because The Satanist and it got a very loud roar of approval from the assembled masses
3)      God = Dog because it was the first song from the new album released and it is bloody great.
4)      Blow Your Trumpets Gabriel, as that probably prompted the loudest singalong of the night. 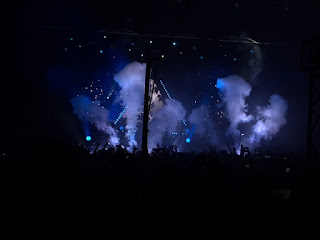 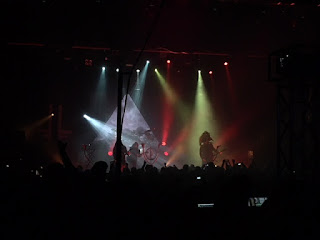 Behemoth were bloody great. I’m not sure if they’ll be as good at Download in the middle of the day on the main stage, but if you are going and you like your metal heavy, blackened and death – go and see them. If you don’t, well go see them anyway!

1)      Wolves In The Throne Room were better than I thought they would be.
2)      At The Gates were superb. I really want to see them live again.
3)      Behemoth were outstanding. I wouldn’t be shocked to be hyperlinking this blog come December when I write my end of year list.

Labels: 2019, At The Gates, Behemoth, Live Music, Wolves In The Throne Room