The pool stages of the Rugby World Cup have finished and my word, the tournament has just been brilliant so far hasn’t it? This World Cup really could go down as one of the best in the tournaments history. I was going to write a round-up blog like I normally do. Before I do that though, I want to pay tribute to some of the tier two nations have just been eliminated from the tournament. Namibia, the lowest ranked team in the competition, made history for themselves by finally registering a World Cup point, getting a losing bonus point against Georgia. In their last game against Argentina, with their elimination well confirmed by this point, they still played their skins out and managed to score 3 tries. They also created what was for me one of the moments of the tournament. They scored a try right at the end of the game (which lead to their bench celebrating as if they had won). The commentators were all talking about the try and showing replays when suddenly focus turned to the conversion, and up stepped prop Johannes Redelinghuys to take it. It turns out this game was going to be his last game before ending his career, and the team let him sign off by taking the kick. What a great moment for him, Namibia and the game as a whole. Sadly, the kick hit the bottom of the post (I think had it gone over, it would have received one of the loudest cheers of the tournament so far). What a way to go out. The quote from him after the game as well was superb (picture from @rugbyworldcup on Twitter) 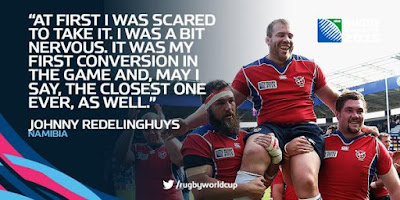 What a great tournament this has been for Georgia as well. They started off their tournament with arguably the biggest win in their history, beating Tonga 17-10. This World Cup has been their best performance at a World Cup I believe, as they got two wins in the pool stage, also beating Namibia 16-17. However for me, what I will remember about them from this tournament was the game against New Zealand. It was the first team these two nations played and although the result was not a shock, Georgia did not roll over and let it happen. They put in a massive shift against the All Blacks, with their captain Mamuka Gorgodze being named Man of the Match. That and their smiles whilst New Zealand performed the Haka made this a really special game. Beka Tsiklauri will always be able to say as well that he scored Georgia’s only try against New Zealand to date. Not a bad little piece of history to have! The Pacific Island teams had a bit of a rough tournament really, with all 3 of Fiji, Samoa and Tonga finishing fourth in their group. This means none of them automatically qualify for the next Rugby World Cup in Japan in 2019. It will be interesting to see what happens there actually. It would be odd to see a World Cup without all 3 of those nations there. I’m not sure how it will pan out. The team I feel most sorry for out of them though is Fiji. Drawn in a pool with Australia, England and Wales meant they had some top level games to play but almost no chance of qualifying for the quarter finals. They played three really good games against these teams as well but got no points to show for it. Sport can be a cruel beast at times. They closed out their World Cup with a win over Uruguay but the draw probably affected them just as badly as it did the other teams in the pool. I want to make quick mentions to Romania and Canada. I didn’t get to see their game against each other, but they both will go home happy from this tournament I think. Canada might go home slightly disappointed if they think back to the games against Italy and Romania. They pushed the Italians all the way and could have pulled off a famous win, but sadly they didn’t. They also got a losing bonus point against Romania as well, with Romania having to come from behind to win. Romania really caused France some problems for a long time in their game. France always looked like they would win but Romania definitely frustrated them at times, which was good to see. They also played a good second half against Italy in their final game and were close to getting a losing and try bonus point.

The final mention though has to go to Japan. I gave them no chance before this tournament, as I am sure so did many others. There have been so many words written about that game against South Africa. Just yesterday I watched that try which won Japan the game again. It was such a moment in time. The biggest Rugby World Cup upset? Undeniably. The biggest upset in the history of Rugby Union? If there is ever a top 10 list, it will be in it. One of the biggest upsets in sporting history? I would say so, yes. From that moment, almost everyone wanted to watch Japan win. I think it legitimately surprised people just how good they were. Their 4 day turnaround before the game against Scotland was just unfair really, and something which ought to be changed for the next World Cup. Teams like New Zealand can deal with such a short turn around as they can almost pick a new XV from their squad without issue. The smaller nations just can’t do that, and 4 days isn’t long enough to recover properly in time for another game. They comfortably beat Samoa in another game I expected them to lose. Samoa went in at half time having scored no points, and not looking like they would score any. They managed to get one try scored by the time the game ended but Japan were the deserved winners. They went into the last weekend knowing they could potentially qualify for the quarter finals. If Scotland lost to Samoa, they had their chance assuming they could beat the USA – a team they lost to back in July in the Pacific Nations Cup. Sadly for the, (and for rugby as a whole I think), Scotland beat Samoa and qualified for the quarter finals. This meant there was little to be played for in Japan’s game against USA. You wouldn’t know that by watching the game though! Japan played a fantastic game (and USA also played very well). Japan won, and became the only team in Rugby World Cup history to record 3 victories in the pool stage and not qualify for the last eight. It is such a shame they didn’t because they have been great to watch. For me, they have been the team of the tournament so far. Long after this tournament ends, people will still be talking about Japan and I think they will have become a lot of people’s “second” international team. Hopefully, the departure of their coach Eddie Jones does not derail their growth as a rugby nation. It would be great to see them make the last eight at their own Rugby World Cup in 2019.

To Japan, and to all of the tier two nations that have just been eliminated – thanks for the memories. You have all helped make this one of, if not the best Rugby World Cups in the history of the tournament. The next post will be my week round-up and a look back at my predictions blog – we shall see how I got on!
Posted by Mike Tyler at Tuesday, October 13, 2015