Over the next few weekends, AEG are putting on their festival in a day type events called British Summer Time and covering a variety of musical genres in their bills. I was at one of these events recently to watch Black Sabbath and others. Before talking about the bands and giving them ratings, I wanted to make a comment on the event itself. Firstly, they probably need to review their bar prices (I don’t tend to drink at these events, but there is no way I will be tempted to by charging £5+ a pint). That being said, the bars were busy all day so maybe people are okay with being ripped off. I also think they need to sort out their food stalls. It seemed as though everything had a big queue, which isn’t good. They also had a few stalls I’ve never seen at a festival before, which was kinda cool (Old El Paso food van is the one that sticks out in my mind). My final comment on the event would be to change the position of the stage. The stage seemed to be facing off-centre, which was odd. Move it back and don’t have it be off centre. I have no idea why there was such a large area behind the stage, but it seemed unnecessary. Anyway, that is all I have to say about the event for now. I’m considering a blog where I discuss the future of the weekend festival and the decline of the giant festival headliner and these series of events would feature heavily as a potential future model. 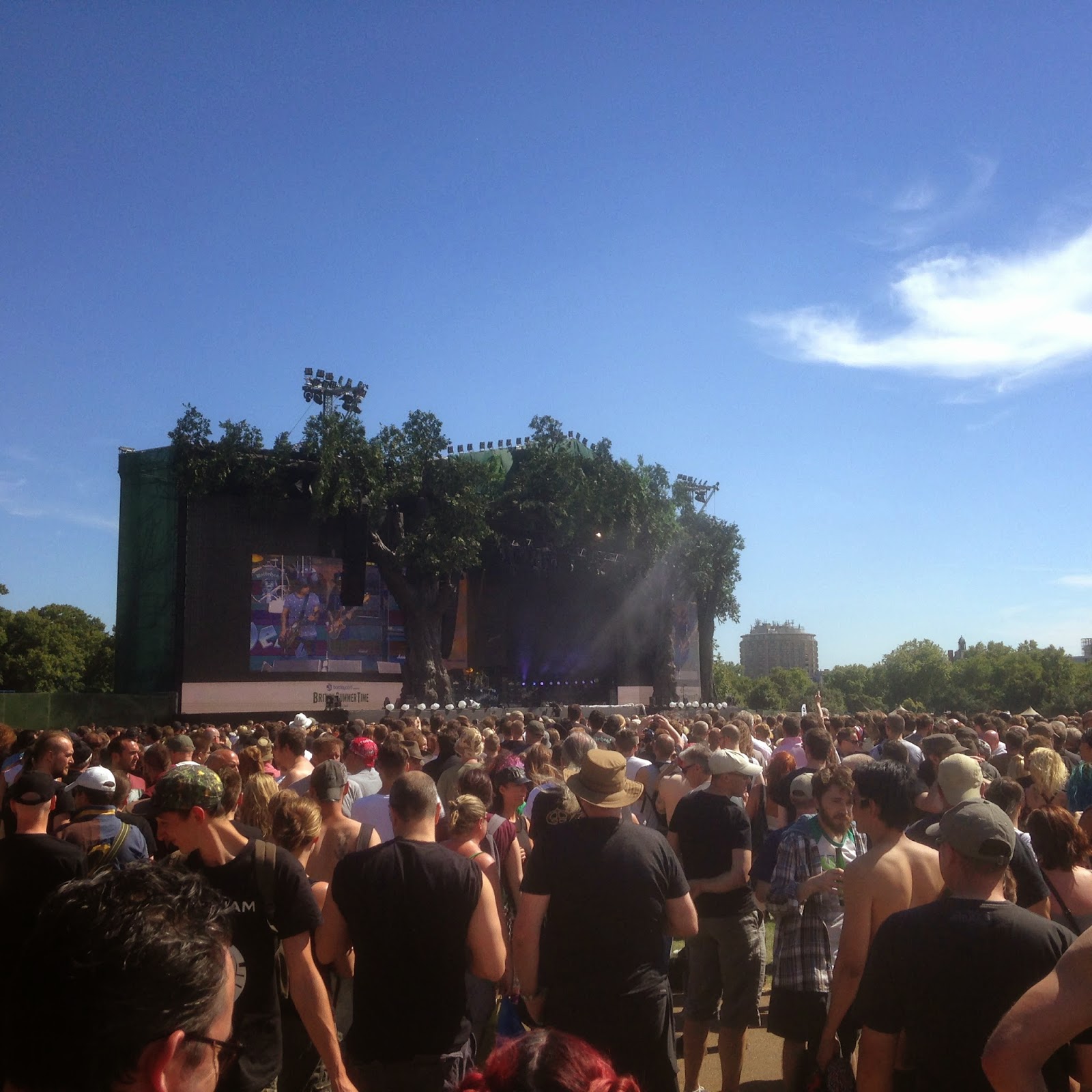 This is a live music event, so I should probably discuss that now. When this line up was announced, I knew I would be spending most of the day in front of the main stage as I wanted to watch all of the bands that had been announced for it. I had hoped to make it in for Soulfly but due to me not wanting to pay more money for the room, I checked in at 2pm and I had 45mins to get out the room and get across London. I made an effort to do it (I think they were just finishing their set as I arrived at Hyde Park, which was a shame). I wasn’t overly heartbroken about missing them as I’d seen them before a few times and I think they are better indoors than on a big open air stage. The first band I did see was Motorhead (6) and while I enjoyed them, I couldn’t help but wonder how much longer Lemmy has left of being able to perform. The set was a standard Motorhead set full of their biggest hits (aside from the inclusion of Lost Woman Blues from their latest album which surprised me). It seemed from the off that Lemmy was struggling with the singing portion of the set and after just 4 complete songs, Mikkey Dee did a lengthy drum solo. While this is generally impressive to watch, it was concerning that it happened so early on in the set. I couldn’t help but think maybe it is time for Lemmy to wind down performing. I’m sure if he announced one off shows in the UK, US etc, he could sell out big rooms and say goodbye from the stage. Huge Motorhead shows with a ton of guests? That would be a great way for Lemmy to sign off what has been a long and legendary career. On this day, it was great to see Lemmy back on the stage after what happened at Wacken 2013, but maybe the health problems of 2013/early 2014 and that Wacken set should have made Lemmy think about calling it a day. I would prefer that I think rather than watch Lemmy struggle on through for years to come.

Next up on stage was the band I was most looking forward to (if I’m honest) and that was Faith No More (10). They had questionable sound at times but I wrote that off to it being an open air gig and that happens from time to time. The band was just excellent and Mike Patton was on top form vocally. The set was packed with great songs including a new one they performed. Does this mean a new album is on the way? I sure hope so! During FNM, someone tapped me on the shoulder and told me I had dropped a tampon that was on the floor by my foot. He and his friends found this hilarious. I can only assume these people are the same kind of twat that finds it funny to shout “ALAN!” and “BUTTSCRATCHER!” at a festival – these people are just awful people. I no-sold the “joke” and returned my attention to main stage. Writing what I have here has given this incident way more attention than it actually deserves, but sometimes, people need to be told when they are being twats. Anyway, Faith No More were incredible and played everything I wanted to hear (Ricochet aside) including We Care A Lot which made me very happy as I had to leave their 2011 Hammersmith gig early and missed them performing that song. After Faith No More, I went to get a bite to eat (which is when I discovered all the big queues). After eventually finding something I considered worth queuing for (I was wrong), I headed back to main stage. While I was queuing though, there was a small open air stage nearby where Blitz Kids (7) were on stage. Never really checked them out (despite having plenty of opportunities) but after what I heard on this day, I am definitely interested in hearing more about them. I notice they are coming to my home town as a support band on a Reading festival warm up show – can’t justify that ticket just to see them which is a shame.

Back on the main stage was a band I was really looking forward to seeing (perhaps not as much as Black Sabbath and Faith No More). Soundgarden (8) are one of those bands who I had never really listened to much of their stuff. Of the stuff I had heard, I was 50/50 on whether I liked it or not. They do have some absolute belters though and I was hoping to hear some of them live before having to depart for a side stage. They came on stage and announced that probably for the final time, they would be playing their album, Superunknown in full. This got a huge cheer from the crowd but unfortunately the magnitude of this announcement was somewhat lost on me. A quick Google later and I found out some of my favourite Soundgarden material was on this album and I would get to hear it, so I was very happy with that. I genuinely think if I’d known Superunknown was going to be played before they announced it on stage, I would have been able to research more and then enjoy the set more as I’d be more familiar with the material. That aside, they were excellent on this day and only don’t get a higher mark because I was sat down enjoying them and had to leave early to go and catch a band playing on the Village Hall stage. I think though on the back of this performance, I’d be tempted to go to a Soundgarden headline show if a tour was announced.

I will make one comment about the Village Hall stage – it is fucking dark in there! I have no idea why but that was just stupid. Aside from the lighting issue, I thought it was cool they essentially had a pop-up gig venue essentially as a side stage (as opposed to tents like you see at most other festivals). I was at this stage to see the headlining band, Gallows (9) for the first time since Wade MacNeil took over vocal duties. Gallows ripped the Village Hall a new one with this set – they were just fantastic. I was intrigued to see how well older Gallows material would be handled. The answer to that is very well as they belted out In The Belly of a Shark and Orchestra of Wolves. I had decided to give them a miss at Sonisphere as I was seeing them at this festival, but they were so good I decided to see them again 2 days later. I’m hoping when their new album comes out, they do a full tour of the UK as I’d love to see them again. After leaving the Village Hall (carefully I might add – did I mention it was dark in there?), I headed back to main stage to take a spot for the day’s headliner. However before doing this, I noticed Turbowolf (7) were finishing their headline spot on the Summer Stage. I haven’t heard much Turbowolf but what I heard here was great. I didn’t get to hear much but I was left wanting to hear more after this brief introduction to them. Walking back round to main stage, on another little stage (I guess, there had been a DJ there most of the day) was now an act called The Cuban Brothers. They did an almost Samba version of Ace Of Spades as I was there which was kinda cool. One of the band members being a tight morph suit was a tad disturbing mind. No rating as I didn’t stay for the whole of the song but it sounded interesting. If they had a full band playing the music rather than a DJ, I can see one of their gigs being a lot of fun. 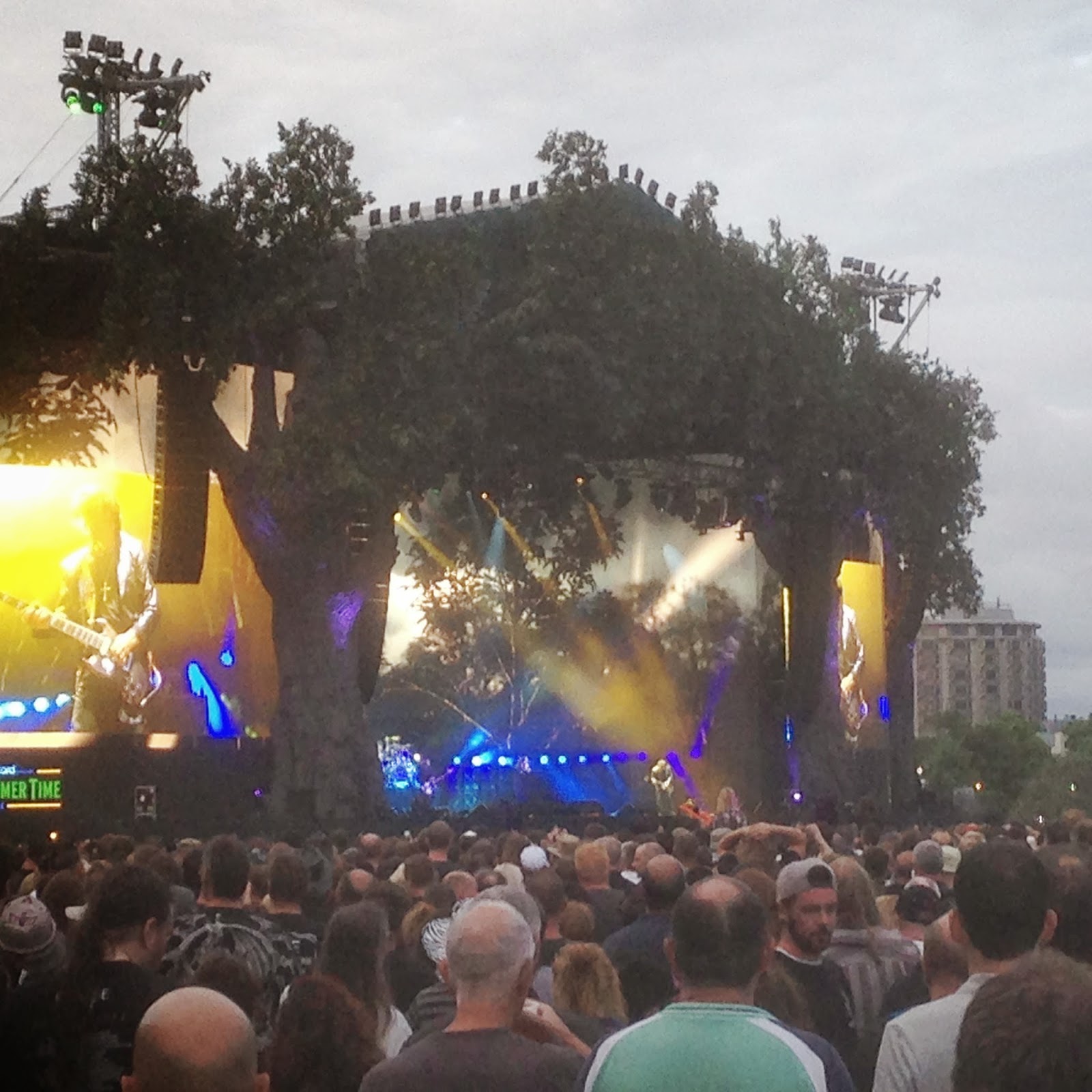 The headliner for the day was Black Sabbath (10) and I was excited but nervous at the same time. I remember seeing them at Download 2012 and they were immense that day. I hoped they wouldn’t put in a poor show (in all honesty, my main concern was Ozzy’s voice, after seeing him put in a not-so stellar headline set at Wacken 2011). Those concerns were dashed within a few songs as the band was on top form. War Pigs was a good choice as a set opener and got the crowd singing along. Ozzy did his usual “I can’t hear you” antics after and during most of the songs which did get irritating after a while. I have no real complaints about the set though if pushed to make a decision, I would say they were better at Download. Ozzy’s voice was spot on at Hyde Park and the band were on top form. However they did do a shorter headline set and we were treated to a long drum solo after/during the song Rat Salad (much like when Ozzy headlined Wacken 2011). The major difference between this set and the one from Download is that this one contained two songs from their latest album, 13. Both songs were well received and reminded me how much I did like the album. All in all, I was very happy with the headline set and even a late rain shower didn’t put a dampener on what had been an excellent day.