10 Songs You Should Listen To - Nine Inch Nails

This is a new type of blog for me, a list of a band’s songs - especially when it isn’t a top 10 per se. What this will be a list of 10 songs by a chosen band in no particular order that you may have missed in favour of other, more popular songs. It seems appropriate for this first one to choose a band that has featured quite a lot for me in the last week (2 gigs and a pre-order of their new album) – Nine Inch Nails. 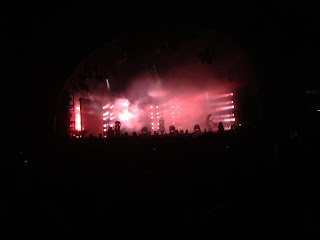 Now when it comes to Nine Inch Nails, everyone that is a casual fan of theirs knows the bigger songs. Even people who aren’t fans probably know a song or two by them. Songs such as Closer, Sin, March of the Pigs, Head Like A Hole, Survivalism, The Hand That Feeds, Starfuckers Inc, Terrible Lie and of course, Hurt. Hurt is not a Johnny Cash original although there is a strong argument to say he made the song his own. There is also a good case for suggesting that whoever suggested Leona Lewis covered it needs to be hung, drawn and quartered – but that’s another topic for another blog (come to think of it, I did blog about it, but I can’t recall when). Casual NIN fans know and love the more popular songs but this collection of songs is 10 that you should listen to as well. They aren’t rarities – they are just good songs. Nothing that is on this list will come as a surprise to a hardcore fan of NIN, or at least I hope it wouldn’t.

·         Non-Entity – NINJA 2009 Tour Sampler
A song I saw them perform live twice, but it was the second performance of this song at the Sonisphere festival that really made me realise just how good of a song it is.
·         The Big Come Down – The Fragile
Again, another song I’ve seen played live (but just the once I believe). It is just a superb track.
·         The Frail  - Things Falling Apart
The Frail is considered the intro song to The Wretched, but on this album it is reworked, and I absolutely love it, almost if not as much as the original.
·         Burn – Natural Born Killers Soundtrack
A live favourite.
·         In This Twilight – Year Zero
A song which I had overlooked really until I saw they closed with it on their final show on the Wave Goodbye tour and revisited it. It was then I realised how wrong I was to overlook it.
·         Down In It – Pretty Hate Machine
The first NIN single – a song that I liked, but became a favourite of mine after seeing it live again (I saw it live the 2nd time I saw NIN live but I didn’t know the song well then).
·         Gone, Still – Still EP
A piece of music that makes me want to learn to play piano/keyboard. I’m not sure I ever will, but if I do, this song had a hand in it.
·         Lights In The Sky – The Slip
The Slip was an album released for free initially. This is a song which I loved anyway, but when seeing it live just made it a favourite.
·         Last – Broken EP
One of my first favourite NIN songs. I was delighted when it was played at my first NIN gig.
·         I Do Not Want This – The Downward Spiral
I had to include a song from the Downward Spiral and it was a tough call which one to go for. I Do Not Want This is an excellent song both if listening to the album or hearing it live.

When putting that list together, I wondered about whether or not to include any of the songs that have been made available from the new album or not. I decided against it as the ones that have been released are all superb songs and I could see them being in and out of NIN setlists until touring does finally cease. It will be interesting to see if I am right about that one. Looking at that list, there is one song in there that is in the setlist regularly (in fact has been in the set 4 out of the last 5 times I have seen NIN) and that is Burn. However, due to the fact it did not appear on one of NIN’s studio albums and is such a good song, I felt it was a good candidate.

I’d be intrigued to see what other people would pick if they had to make a top 10 of Nine Inch Nails, avoiding all of the bigger songs like  the ones I mentioned earlier.
Posted by Mike Tyler at Monday, August 26, 2013