This is a new style of blog for me. Normally, or at least for the last year or so, I’ve found a topic and wrote a blog about this. This blog and future ones like it will be various talking points that have emerged. The thing to note at this point is I’ll be talking about things I either have some knowledge about, or I have an opinion on. There might just be one or two topics some times, and sometimes there maybe be five or six – it really depends what is going on. With that in mind, this is the first one, and there are five topics. I will sometimes include an odd story at the end although I don’t suppose I’ll have much of an opinion on that.

The first topic is one that is really very sad and that is the disappearance of April Jones from the small town of Machynlleth in Wales. There is not a massive amount I can say about this one other than passing on my best wishes to the family and hoping that April will be found alive and well. However it has to be said as each day passes; I am losing faith in that outcome. A man, Mark Bridger, has now been charged with her murder which indicates that the police don’t expect to find her alive. He has also been charged with perverting the courts of justice and child abduction – so if April is found alive, Bridger could still be punished if it is proven he is responsible for this evil crime. I just can’t imagine what goes through someone’s head just before they snatch, or try to snatch a child. This must be such a horrible time for April’s family and close family friends, but I can’t imagine the pain they must be suffering, knowing the only person arrested and charged was friends with April’s father. I said it earlier, but my thoughts are with her family and I really hope that she is found alive and well.

Since last weekend (I think) and throughout this week, there has been a lot of talk regarding Jimmy Saville and the allegations that during his time at the BBC, he sexually assaulted teenage girls. Truth be told, I never really knew a great deal about Jimmy Saville before he died. I had heard about his charity works and that he was a little strange (keeping his deceased mother’s room [The Duchess’s Room] perfectly intact for example). I learned more about the man watching the Louis Theroux meets special about him. When the news first came out, I was surprised about it but the more I thought about it, and the more I thought about the information in the Louis Theroux show, it then occurred to me that perhaps this wasn’t so surprising. He discussed never having a girlfriend in the show. I remember not thinking much about it at the time but thinking back on it now, maybe the real reason for this was because he just wasn’t interested in being with a woman who was of age enough for her to be his girlfriend. I’m merely speculating here and I don’t know anything for sure. Other people have been implicated in this story now. Names such as Gary Glitter, Jonathan King and Freddie Starr have been dragged into this story. Are all these allegations true? It is hard to say.

What has come out of this story is that people high up in the BBC were more than aware of these allegations and may have had a hand in covering them up (one source even implicates them in adding and abetting them). That to me is shocking if that’s true and the BBC will have a lot of questions to answer. On Thursday’s BBC Question Time, Janet Street-Porter discussed how she knew about the allegations surrounding Jimmy Saville and others. She also discussed how she thought the women affected did not come forward as Jimmy Saville would/could hide behind his charity work and they would end up being thought of as liars. When discussing the BBC, she said that she could have bought the allegations up but the environment was “totally male”. This view of the BBC during this time has been backed up by a former Radio 1 (current 6 Music) presenter Liz Kershaw. Kershaw claimed she was fondled while on air and when she complained, the people she complained to clearly thought she was either lying or exaggerating, and said “don’t you like it? Are you a lesbian?” Obviously, a lot has changed in the BBC (or at least, I assume it has) but this story could be very damaging to the Corporation. If the allegations about Saville are true, then short of his reputation being damaged, not a lot can happen now he has passed away. If the allegations about the other people who are still alive are true, I hope they get prosecuted. If the allegations made against the BBC are true, well I can’t imagine what will happen. Obviously there will need to be prosecutions and a large amount of apologies – but that will be too little, much too late. What this story has proven, if true, is that there are different rules for celebrities than for normal people – and that is quite a sick state of affairs.

Changing the subject completely now, Jeremy Hunt this week has come out and said he would support changing the abortion limit should be reduced from 24 weeks to 12 weeks. He said his view was his own and it had been reached because of evidence, not because of his religious belief. I heard this story and sighed until I saw that it was not a policy being adopted by the coalition government. Thankfully, they are not planning to make the change. I saw a few tweets on the matter which made me smile. 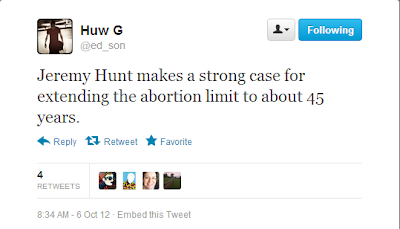 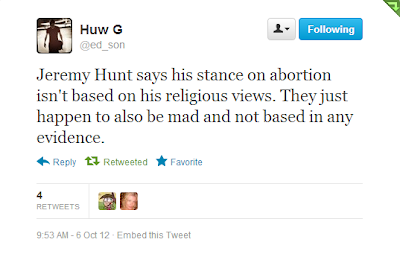 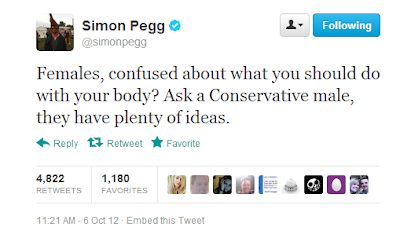 I don’t know what Jeremy Hunt was thinking making this claim. That is a very controversial opinion for the Health Secretary to have. Well, in my opinion it is controversial anyway. I personally am pro-choice when it comes to abortion and I think that it should be entirely the pregnant women’s decision. I heard an argument recently saying a man who does not want the child should also have a say but I’m not entirely sure I agree with that. Here’s the thing – my opinion on this is basically invalid. I’m allowed to have one, but it doesn’t and shouldn’t mean a great deal as it’s not me who will be having the abortion. In the same week, the Women’s minister, Maria Miller, said she should support the limit being reduced from 24 weeks to 20. According to Sky News, 91% of abortions take place before 12 weeks anyway, but I feel that reducing the limit much beyond 24 weeks could be problematic. I think Hunt really should have kept his opinion to himself on this issue and if asked, should have given the politicians answer – I support the government’s position on this policy. Yes, he would have been given stick for giving the politicians answer, but I suspect that would have gone away a lot quicker than the criticism for suggesting quite a controversial policy.

It has been a strange set of affairs that we are unable to deport/extradite people from our country freely, especially when they have been accused of committing a crime or advocating acts of terrorism. I wonder if we are restricted in our freedom to deport/extradite people because we are members of the EU. Based on the fact appeals have gone to the European Court of Human Rights, I would guess that it is. If so, just another reason to consider leaving as far as I am concerned. But I’m not here to be all euro-sceptic right now; I’m here to say that finally, Abu Hamza and others have been extradited to face trial in the USA for crimes dating back to 1999. It really shouldn’t have taken over 10 years to complete this but it doesn’t matter – it is done now. He has been extradited alongside Babar Ahmad, Syed Talha Ahsan, Khaled al Fawwaz and Adel Abdul Bary. Reading the list of charges against each man, I am amazed it has taken so long to extradite them and again stress I am pleased to see them go. I just hope that in future, if we have a person living here who openly wants to commit acts of terrorism on the people here or elsewhere, it won’t take so long for justice to be served.

Is anyone at this stage surprised that Ashley Cole isn’t an excellent person? The report relating to John Terry’s FA racism case was released in the week, in which they said that Ashley Cole’s evidence had “evolved”. Ashley Cole, furious at this, tweeted the following: 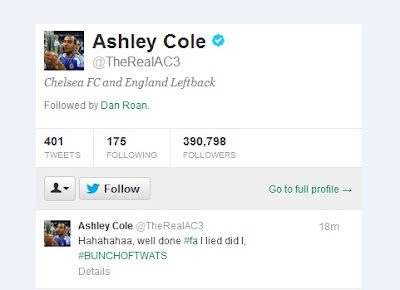 Which let’s face it, probably wasn’t smart. But then, he isn’t really. Or if he is, he hides it really well. I saw a fantastic comment on the whole situation. “I think people are over-reacting over this whole Ashley Cole situation. I mean, it is not as if he has shot someo....oh”. I have very little else to say on this matter without ripping off the article Henry Winter wrote about John Terry and Ashley Cole. So here it is - http://www.telegraph.co.uk/sport/football/teams/chelsea/9590947/Chelseas-Toxic-Twins-John-Terry-and-Ashley-Cole-are-an-embarrassment-to-the-game-and-their-peers.html

“A graduate has found a job with a difference - working as a human scarecrow.Real-life Worzel Gummidge, 22-year-old Jamie Fox spends his days sitting, reading and strumming his ukulele.But he leaps into action when birds begin to circle, scaring them with his bright orange coat, accordion and cow bell.Mr Fox, who studied music and English at Bangor University, is halfway through a fortnight-long stint scaring partridges from a field of oilseed rape near Aylsham, Norfolk.” (Sky News)

Well, I can’t fault Jamie for wanting to work. It is a bit of a strange job granted, but it’s doing something different and earning money. I have just noticed he almost gets paid as much as me which makes me a little bit sad but no matter. Pretty cool story all around I think.