Going to see Ginger Wildheart was my second trip to Manchester this week. I was there for Guns N' Roses earlier. You can read that review by clicking here. I was worried before GnR about travelling up to Manchester and seeing a shit gig. That didn't even enter my mind when travelling up to see Ginger. The main reason for me wanting to make that journey is because at the end of last year, Ginger announced he was not going to be touring regularly for a year or more. So, this little pre-Download tour was something I wanted to be at. I also wanted to go because this is the first set of shows after 555% (the triple album PledgeMusic project) album was finished and I wanted to see some of that material live. I want to say a quick word about the venue which was Manchester Club Academy. Really different room to Academy 3 (which I was at for Dimmu Borgir) but I like it. Also, they charge £3.30 for a John Smiths. I don't mind paying that for a good pint so I did. Venues that charge £4+ for a drink will never see my money. Maybe I am alone in that, but Club Academy charge less and that appealed to me when thinking of buying a drink. The next few were due to getting a taste for Smiths. Club Academy - I am in favour.

The night was opened by Baby Godzilla. Ginger tweeted that you don't want to miss them, and I managed to. That was a failure on my part. As a result, I have no comment on them. The second band on was The Guns - a band who I had not heard of before this tour. I listened to some of their stuff before leaving and it sounded quite good. My post-show feelings were that musically, they were really very good. I enjoyed their music and thought they had good energy. I thought it was odd that the lead singer seemed to shit on the crowd during songs and then give thanks afterwards. Perhaps me saying they "shit on the crowd" is a bit excessive. Here's the thing though - I've not really heard of this band and yet the lead singer says "I couldn't give a fuck if you care about us afterwards". I thought the point of a support band was to not just warm up the crowd for the main act but also to try and get their music heard by a new audience. I'm not really into a band who says repeatedly that they don't care if I like them. Maybe that shouldn't bother me but it did. The singer also seemed annoyed when we didn't sing along with their songs. Don't tell me you couldn't give a shit if I like you and then get pissed when I don't sing your songs (that I don't know!) Seems like a quite odd reaction to me - I'd hate to see how they'd act if they supported Motörhead! Conclusion - musically The Guns were really good. I didn't like their general attitude onstage though. One thing which did win me over slightly was during Ginger, one of the band members (possibly all) were handing out free copies of their album (or one of their albums) so I'm sure I'll give that a listen. That is a really good marketing idea as far as I'm concerned.

After them and a relatively short change over time, it was time for Ginger. There was a cheer from the crowd because something got set up involving a traffic cone but I didn't see what was going on. Anyway, the band came on and the gig kicked off with a song from 555% - Another Spinning Fucking Rainbow. It was a superb start to the gig. The rest of the set was a good mix of The Wildhearts and Ginger's other solo projects (Silver Ginger 5, Ginger Wildheart etc). The next songs were Girls Are Better Than Boys, Mazel Tov Cocktail, Anyway But Maybe and Sonic Shake. I really liked this strong opening to the set especially considering the solo stuff I either hadn't heard live before or hadn't heard that often. The crowd at this point had really filled up and were in good voice. 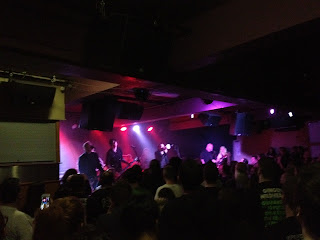 The next song in the set was Taste Aversion, another one from 555%. I thought it was really good but after the song Ginger talked about having a brain fart with the new material. I didn't notice! We also got to hear Confusion from the new album which again was really good. What followed were 3 quick songs in a row - S.I.N, Very Very Slow and Suckerpunch. That was so good. Very, Very Slow was played twice in a row which I really liked. I'm hoping these three songs are run through like this again at Download. Following these three was Sunshine From New York (probably my favourite from Chutzpah) and The Hard Way. This was a superb end to the main set.

Before the encore, the crowd changed for Ginger and sang Don't Worry 'Bout Me. I thought this was really cool. I remember this happening in Southampton and London when I've seen Ginger previously and it was fun. The first song of the encore was the last one from 555% and it was Just Another Song About Someone. The set closed with 3 Wildhearts songs, Do The Channel Bop, Can't Do Right For Doing Wrong and Inglorious. This was such a good end to the set and left everyone in a happy mood when they left. 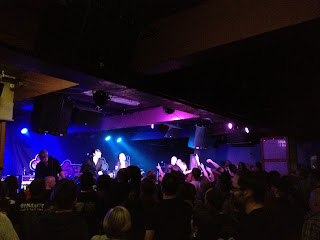 Overall, this was another superb showing from Ginger. I can't wait to see his set at Download next weekend. I wish it was longer than 30mins but that's better than no set. I've seen by looking at Ginger's Formspring that there will be a Birthday show this year but there has been no indication of a December tour. After the Manchester show, I really hope there is one. If there isn't, that will really justify my decision to travel from Portsmouth to Manchester to see a Ginger headline show - not that the show alone hasn't already done that.
Posted by Mike Tyler at Monday, June 04, 2012