Nearly two weeks ago, I nipped over the channel to go and see Metallica play the Stade De France. This was the 9th time of me seeing Metallica and the first time I’ll see them on this tour which is celebrating the Black Album by playing it in its entirety. I am also due to see them again in just over two weeks at Download. I’ve mentioned it occasionally on this blog. I went to this gig with Dave. I don’t know if he’s written a review but if so, it’ll appear on the blog linked on the side of this one. This review will cover the gig, and all the things which happened before and after.

This trip marked the first time I was going to use the Eurostar to get across to Paris. I’ve heard mixed things about it as a mode of travel but my experience of it was fine. We weren’t delayed at all. The only gripe with it I would have is there are a lot of little tunnels. Obviously, the Channel Tunnel excluded, the little tunnels were a nuisance because they were loud and played havoc with my ears (they popped, a lot). That aside, the journey was smooth. I did almost crack my ribs when using the toilet but that’s a risk anyone takes using a train toilet when the train is moving right? Right? Anyway...

The original plan was to stay in the Gare Du Nord train station over night after the gig and just wait and get the train home in the morning. Logic won out though and a hotel was booked. The hotel was literally across the road from the station which made life so much easier. The hotel was booked via a 3rd party website so I was a bit concerned about the whole thing but it turned out fine and we checked in without an issue. Before going to the hotel though, we went to the metro lines and bought a ticket which would get us to one of the stations near the Stade De France. The machine gave us one option for a ticket which seemed somewhat odd, but it was a metro ticket machine so the assumption was made at the time we would be fine. As it transpires, we weren’t. We got to one of the stations and were faced with barriers that were rejecting the ticket. Looking perplexed, we continued to try to no avail. Eventually, a member of staff came over to us and started speaking really quite fast in French (in France...who knew!) to which we looked confused and said “sorry, English?” The member of staff then said “aah....English!” and carried on speaking French. That was not helpful in the slightest. I believe there is a Blackadder joke about the most pointless book in the world being “How to Learn French” after it was translated into French. That’s how I felt in that moment. We got beeped through the gate after I’m guessing the member of staff either got bored of us or realised we didn’t intentionally defraud the country of France.

The station we went to was a fair step from the stadium and I couldn’t help but feel like we were walking to Rock AM Ring when we ended up walking along the motorway. I would say the walk from the station we ended up at was about the same, if not slightly longer than the walk from Twickenham station to the stadium (if you’ve never done that walk, then that analogy was redundant). Anyway, the stadium was really easy to find. Granted, the crowd of people all heading in the same direction helped quite a bit. One thing which had me panicked on the walk to the stadium was the number of touts who were selling tickets which did not look like the ones I had. I came to the conclusion that either they had fakes, or I did. I used the website Metallica linked to though, so in hindsight, that was a stupid thing to be worried about, but I was somewhat out of my comfort zone. I confidently predicted we would have to walk halfway round the stadium to enter the gig and I was 100% right. Being right sucks sometimes kids! As we walked up to the stadium, we could hear the end of Gojira’s set. It was a real shame missing them. I had it in my head that they would be main support as we were in France but as it transpires, I was wrong. We kicked around, outside the actual bowl as neither of us had any interest at all in seeing The Kills play. That was a long support slot, or it certainly felt like it. Granted we were outside the stadium but they sounded bad. They got a huge cheer at the end so what do I know? As soon as they went off stage, we had what we thought would be a final smoke and headed into the bowl. It turned out not to be the final smoke as France’s rules on smoking in public places differs from the UK’s and smoking inside the stadium was permitted. If I’d know that ahead of time...I still would have stood outside smoking while The Kills were on! One thing which was really entertaining was all the Mexican waves which took place around the stadium. Superb. 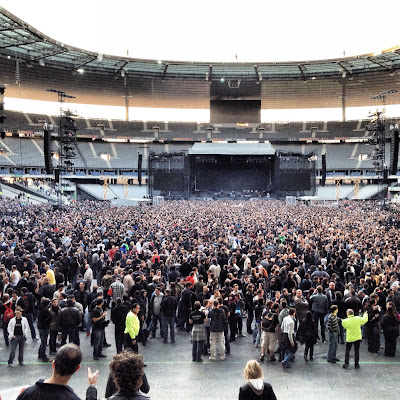 After what seemed like Disturbed’s entire back catalogue over the PA (without their cover of Land of Confusion, may I add), we got some build up songs indicating it was Metallica time soon. As the final beats of “It’s a Long Way to the Top (If You Want To Rock and Roll)” faded, the familiar roar of the crowd occurred. No words I type can sum up the level of excitement which runs through me as soon as The Ecstasy of Gold starts. 9th time be damned, in that environment, it gives me Goosebumps every time! The famous video finished and the song died down and out on stage were Metallica! I could go now and talk through each song but I will talk about some personal highlights. I love the opening combo of Hit the Lights and Master of Puppets. They are songs you wouldn’t expect to open the set with but it just works. It was the same opening to Sonisphere last year and it’s excellent. On the other European dates before this one, the 3rd song was due to be The Shortest Straw (same as Sonisphere again) which I was fine with. Dave isn’t a fan of the song (but that’s because he is a bad person). However, as the final notes of Puppets finished, Hetfield came to the microphone again and said “Paris....NO REMORSE!” which was immense as I hadn’t seen that song live since 2008. For Whom the Bell Tolls is always awesome live. The 5th song had been changing up throughout the tour but it seemed to be one of Blackened, Battery or Fight Fire with Fire. I was hoping for Battery but we got something completely unexpected. “From Beyond Magnetic...this is Hell and Back!” I was blown away as I didn’t think I’d ever see a Beyond Magnetic song live but also because I love Hell and Back!

There was a video introducing The Black Album with some facts about the album and some old clips. The whole performance of it was solid. Sandman, as always was superb. It was great hearing stuff off the album I’d never heard live before like The God That Failed, The Struggle Within and Through the Never (specifically). It was great hearing The Unforgiven and Wherever I May Roam as I’d not heard those live in over 5 years. All in all, the Black Album live was stunning.

It was then time for the “encore” which was a minute before a very familiar backing tape started up. After a lot of looks around the crowd to see if everyone could hear what I was hearing, it turned out I wasn’t going mad, and Metallica were about to kick off the encore with Battery! It was absolutely....yeah! I have no words for just how good it was. The band then disappeared and the trademark fireworks went off to signify that One was about to be played. What happened while One played though will stay with me for a long time. There was an absolutely stunning laser show. No, I mean absolutely stunning. I can’t find a good video of it from Paris, so here is one from Belgrade. Just mind-blowing. The set finished with the old favourite Seek and Destroy and we all went home a happy bunch of people. See, I said earlier I wasn’t going to talk about every song and I didn’t. I just talked about my highlights. There were a lot of them.

Following the gig, we walked back to a different train station to the one we arrived at and bought the right ticket! The queue to get on the platform was crazy but well managed. We got onto a train fairly quickly and got back to the Gare Du Nord within minutes. One thing which was entertaining was a lot of people were discussing the gig in French (again, this is normal as we were in Paris) and me and Dave were discussing it in English. We then just started saying random things and talking shit. I declared that it was ok as “no-one understood a word I was saying” and it would seem that no-one did. Result! We got back to the station fine and ventured over to McDonalds for late night dinner. After messing about with a faulty fast order machine, we went up to the counter. I was dreading placing my order as I was going to be the typical Johnny Foreigner who couldn’t speak French. What made matters worse is my throat was sore and voice was going following the gig. I asked for what I wanted and to my complete surprise, the server was fluent in English. Now, if only that could be criteria for the McDonalds staff in this country. Anyway, went back to the hotel and after some TV, crashed out for a few precious hours of sleep.

After what felt like 35mins of awful sleep (I continually woke up), it was time to get ready to leave the hotel. With the station being as close as it was, we still decided to get there relatively early just to be on the safe side. With some loose coins rattling round my pocket, I decided to grab a couple of beverages for the journey back. I noticed a 1 euro waffle in the vending machine which was also purchased. Along with a croissant, that was a quality makeshift breakfast! Got through check in fine and got to the platform whereby we boarded the Eurostar and left France. The trip was so worth it and I would probably do it again for the right band (although I can’t see me doing it for anyone other than Metallica, honestly). The 9th time I saw Metallica was outstanding. They never fail to bore me live. Roll on Download for number 10 (and possibly the first time I will see them play a setlist completely comprised of songs I’ve seen them play before. Prove me wrong Metallica and play Frantic or King Nothing!)
Posted by Mike Tyler at Thursday, May 24, 2012