In 2006, I went to my first festival which was the Download festival. I didn't know much about festivals then and I now look back at that line-up and kick myself over the stuff I missed. The main draw of the festival for me was the chance to see Metallica for the first time. There were other bands I wanted to see but Metallica was the main draw. The other headliners for that weekend were Tool (on the Friday) and Guns N' Roses (on the Sunday). I'd never heard of Tool at this point but GnR were well known. It was well known that it was only Axl Rose left in the band of the classic line up. What wasn't known was what the performance would be like. Everyone expected Axl Rose to be late but he was actually early. The performance was not good. Axl stomped off stage a number of times and we were left with extended solos and it was just awkward. It might have been better than I remember but I have heard barely anyone say they enjoyed GnR that night. I remember seeing a GnR fan, who said before the set he had waited his whole life to see GnR live, crying and telling his friend how disappointed he was. I walked away from Download that night with a bit of a bad taste in my mouth about how the festival had ended for me. After that night, I vowed that I would not pay to see GnR again.

Fast forward 6 years later and I have gone back on my word. Since 2006, the only bad reviews I've read were of the headline sets at Reading & Leeds, and that was due to the festival organisers not buying into Axl Rose and his tardiness. There was a UK tour in 2010 and every date had really positive reviews. The 2012 tour was announced and I said to myself that if I could get a cheap train and a cheap hotel, I would go. Both of those things happened and so I bought a ticket. The reviews before Manchester have all been favourable (other than from people who have had to leave early - and while I don't agree with its acceptability, if you don't know before going it’s going to be a really late one...well where have you been?!) The gigs have all been starting at random times but they have all been finishing late. Arenas don't have to cut off a band as they have 24 hour licences but they might enforce their own curfews. Manchester Arena has on their website their curfew is 11pm. The above words have been written before the gig and I believe that they have wasted their time saying there is a curfew.

Turns out I was right (it was a safe bet) but I'll talk about GnR in a bit. I intended to arrive at the beginning of Thin Lizzy and I'd heard they were starting their sets at 8.30 and finishing at 9.45pm. That should have been a red flag to those unsure if it would be a late one. I wanted to see Thin Lizzy as I had a ticket for their headline show in Guildford earlier this month but had to leave before they played one song due to a headache. I was fairly tired when I got to Manchester and fell to sleep on the bed of the hotel. Woke up at 8.30 and was like "oh shi...!" Long story boring, I rushed to get ready and bombed to the venue. I arrived as Thin Lizzy was in the middle of playing Whiskey in the Jar. I didn't get to see their whole set (WitJ was probably 1/3rd of the way through) but what I saw I really enjoyed. The set closed with The Boys Are Back in Town", which got a huge reaction. I wondered if they would be good live, especially as there aren't many original members of the band left (probably most notably the lead singer), but they really were. That annoyed me slightly due to having to leave early at Guildford, but at least I saw them.

As the house lights went up, I observed that the gig had not sold out. It was probably as busy, if not slightly quieter, than Alter Bridge who played there last November. The whole upper tier wasn't open and there was enough standing area towards the back to walk around comfortably. There is of course a good chance that people, who knew of the lateness, decided not to come in until later so they weren't waiting as long (and not paying arena prices for drinks etc). It is worth noting as well that there were more than enough people to justify this gig being at the MCR arena as opposed to a smaller venue. Thin Lizzy went off stage at 10pm and the crew have the stage sorted by 10.30pm, ready for GnR's arrival. I tweeted at this point that I predicted a 11.15pm start (although I hoped for an earlier start). I wondered about a bit (including doing vital festival prep by spending £2 on a bottle of water). At 11.10pm, I was in the middle of tweeting something about being wrong about the start time when the house lights just dropped and the Massive Attack song Splitting the Atom started. 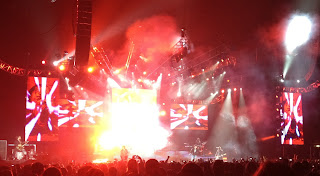 The stage show was fairly cool, with 5 different video screens and raised platforms. 4 of the screens started showing artwork relating to the latest album and the middle screen showed a rotating GnR logo. Behind the drummer popped out of one of the guitarists and took over from the intro tape and the set kicked off with Chinese Democracy. From the off, it was clear the band were in top form and Axl Rose sounded immense. During the song, Rose disappeared off stage and I honestly wondered what had happened. I didn't see anything going wrong. However, he was back as soon as it was time to sing again so then it occurred to me him leaving was not walking off annoyed, but more like how James LaBrie does during long Dream Theater solos. There was pyro and fireworks used (which made appearances at different points throughout the show). The next song was Welcome To The Jungle and the crowd exploded. It was outstanding. There wasn't much in the way of crowd interaction at this point but the performances of the songs were superb. The next songs were It's So Easy, Mr Brownstone, Sorry, Rocket Queen, Estranged and Better. It became apparent during this run of songs that this gig was going to be beyond great. I have absolutely no negative comments to make at this point, which is the complete reverse of where I was at in 2006 watching them. After Better, it was time for the first guitar solo from Richard Fortus. I used this as an excuse to visit the facilities. Now I have a negative comment, Manchester Arena. Your toilets are vile. There is one set of toilets accessible to the standing area, and they were beyond nasty. There's no excuse for that. 3 cubicles and one was flooded and one had a missing door. Just, urgh!

I came back to the standing area just as the solo was ending and Live and Let Die started. This was excellent as was This I Love. Axl then introduced his bassist, Tommy Stinson, and the band played one of his songs with him on vocals. This happened later on in the set but with a Bumblefoot song (with him on vocals). The set was broken up now with a few solos and jams, which I didn't really care for (although Another Brick In The Wall was cool). In-between the solos we got Street of Dreams, You Could Be Mine (which was the only song Axl really made an error on) and Sweet Child of Mine (which was superb). A grand piano emerged and Axl did a piano solo/jam before kicking into November Rain, arguably my favourite GnR song. I was anxious to hear how good or not this would be, as this was one of my main disappointments at Download 2006. It was absolutely superb. The lights went up at the end of this song and wow, a lot of people had left. I can't claim to be surprised now in the cold light of day, but at the time I really was. 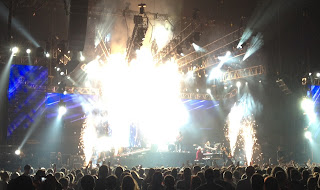 Following November Rain, we got Don't Cry and Civil War before Axl said "the band want to play this song". Expecting to get Knocking on Heaven's Door, we got Shackler's Revenge. This for me was a very good surprise as that is my 2nd favourite song from the Chinese Democracy album. We then got Knocking on Heaven's Door and Nightrain and the main set finished. There was another exodus of people at this point. The encore break didn't last long and the band were back, doing another instrumental jam before Axl came back out and the band kicked into Madagascar and a cover of AC/DC's Whole Lotta Rosie. This was outstanding. There were another couple of jams at this point which again, I could have done without. In-between the jams, we got Patience and to close out the set, we had Paradise City. During the closer, there was a ton of pyro, fireworks and streamers which was really cool. At 2.10am, Frank Sinatra's My Way was playing over the PA and the band said goodbye. 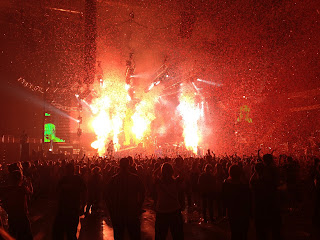 Download 2006 has not been wiped from my memory as it was my first festival and Guns N' Roses were not good. Last night however, GnR were superb. I am so glad that they were as good as they were. I really like GnR and I hated the fact the only things I could say about the one time that I’d seen them live were bad. I can now turn around to people and say that GnR are well worth your money and time, which they are. I've seen people ask why fans still support Axl Rose and buy into his self-perceived idea of how a "rock star" should behave. I was one of those people. Now I get it. Last night’s show was outstanding. Axl Rose was near 100% in terms of his voice and how good he sounded which was a main concern of mine. Within 2 songs that concern was gone.  I think I mentioned it earlier but there was only one song where I thought his vocals didn’t hold up, and that was during the quick part of You Could Be Mine. One small part of one song from a 3 hour set – oh well. I am now really looking forward to their headline set at Hellfest. All in, it was a superb gig. I still don't like the need for the extended solos (I've no problem with the band members solo songs with them on vocals). I also still don't think starting a gig at 11.10pm is a good thing. I really enjoyed the gig and would pay to go see them again (but again, the clouds would have to align in order for me to be able to do it). I felt like I was gambling on seeing GnR after Download 2006, and I now feel like that gamble paid off. Now, I know that seeing them at their own show is a safe bet for a great night/early morning.
Posted by Mike Tyler at Thursday, May 31, 2012

Great knowledge, do anyone mind merely reference back to it magazines for sale