This is another one of those posts about music festivals. If this bothers you in any way, I suggest this isn’t the post for you. I’m going to take a look at the latest announcements for Download, Sonisphere and Wacken as well as talk about some other music bits and pieces as well.

I’m going to start with Wacken as there isn’t a massive amount to say. I think since my last festivals blog, there have only been the two announcements which added 4 bands to the line up. Those bands are:

Aura Noir – At first listen to them I was put off, but revisiting them for the purposes of this blog, it would appear that first impressions are not everything. They appear to be a pretty decent black/thrash metal band that could be worth watching.
Manimals – I’m not sure what to say on this band. On Spotify, there is one song which is a short punk song. It is not bad but also, it is not great. On the MySpace page, there are completely different and much better sounding songs. The problem is that I’ve no idea if they are the same band. Helpfully, if you Google the new album name, it returns you to the Wacken 2012 bio page – which isn’t a lot of help. Bottom line, if the MySpace stuff is the band that is playing Wacken, I am definitely in favour.
Megaherz – German singing industrial metal band. They sound really quite good. I think they are rapidly joining the list of bands I have to watch. However if memory serves at one point Blowsight were a band I had to watch and then they clashed with Avantasia. Needless to say, they lost.
We Butter The Bread With Butter – I think I’ll give these a wide birth. I’m prepared to listen to any band with an open mind. It is hard to do that when a similar artist is “BrokenCYDE” but I honestly gave this lot a go and they aren’t for me...at all. They’re also compared with Suicide Silence, which I don’t believe to be a positive thing.

All in all though, the Wacken line up is starting to fill out quite nicely. So far, 75 acts have been confirmed. There were 126 acts confirmed for Wacken 2011 so there are plenty more to be announced, however I think most of the big acts are now confirmed. There are 30 or so Metal Battle bands that will need to be confirmed which takes the amount up to 105. After Mambo Kurt and WOA Fire-fighters, that is 107. I can’t think there will be many big acts left to be announced. That being said, I’m hoping to see Exodus and Devildriver announced as they were announced for 2011 and both cancelled. As far as I can see, Exodus are in Europe over the summer as they are playing Hellfest and Graspop. Devildriver are also in Europe so hopefully they will also be announced. I noticed today that they are playing the With Full Force festival. Now, there are a few bands shared between WOA and WFF (including a headliner in Machine Head), but I feel this could perhaps discount them from playing. I am hoping for Lamb of God but to my knowledge they’ve never played Wacken. I don’t know why that would stop them now – it could just be worth mentioning. Anyway, aside from them I would like to see Korpiklaani as I’ve not seen them and I’d quite like to. I can’t imagine there are many big names left to announce but a couple more surprises would be nice.

To the Download festival now and I said to myself “you can’t afford this festival for the weekend” but after the last announcement (before the one I am about to discuss) I decided to reappraise that decision. I was already going to get a Saturday day ticket but there was set to be an awful lot I would miss out on because I wasn’t going for the weekend. This decision was also aided by me revisiting Soundgarden and quite liking what I heard. I made the decision if I liked the majority of the next announcement that I would look to purchase a weekend ticket. 14 more bands were announced for Download last week and they were:

Slash featuring Myles Kennedy – This is a superb announcement to an extent as I’m somewhat favourable to Slash’s solo material but am always a fan of hearing GnR songs sung live (except by GnR oddly enough...) and Velvet Revolver material as well. The big fucker about this announcement is that they are headlining the second stage at the same time Prodigy are headlining the main stage. I may do a split watch, but I don’t know yet. It’s my first major clash.
Megadeth – Quality announcement. Saw them at Sonisphere 2011 of course as part of the Big Four and they were really good. I hope they will be just as good in the 3rd from top spot on the Sunday at Download.
Rise Against – It is an excellent announcement by Download but they are clashing with Black Sabbath which means they lose. Sorry Rise Against
Steel Panther – As much as I would like to get excited about this announcement, I’m not. I wouldn’t mind seeing the song “Death To All But Metal” live but other than that I have little interest in them and may find myself somewhere else. However, the fact they are on before Tenacious D could mean they’ll serve to be a good drink break band.
Billy Talent – I’m actually really happy they’ve been announced. They are a really good band who I’ve not seen live and would like to.
Black Label Society – This is one of those odd ones for me. I like some of their stuff and will probably watch them, but there is a lot of their stuff which just bores me. Seeing them will mostly be a chance to see Zakk Wylde live, which I haven’t done yet.
Kyuss Lives! – I am so happy to see these announced as I really wanted to see them at Wacken 2011 but I wanted to get a good spot for Skindred more. Anyway, they are really good and I think this is a strong booking.
Five Finger Death Punch – Before this announcement, if someone asked me about FFDP, I said I wasn’t fussed and that they bored me. This is no longer the case as I have revisited them and actually quite like what I have heard. So there is a good chance I will check them out.
Fear Factory – This is a cool announcement for me as it has given me reason to go back through their discography and discover some gems. They weren’t the best at Sonisphere 2010 so I am hoping for something more at Download 2012 (that thing being Linchpin, hopefully).
Periphery – They sound really good. They are Dream Theater approved as well which is cool. I missed them at Sonisphere last year due to a clash so I will try and catch them this time around.
Terrorvision – Tequila! It makes me happy! That is all I know by this band and truth be told I probably won’t watch them.
Ginger Wildheart – Best part of the announcement for me. I didn’t think he would be playing live all year. Then I saw suggestions there might be a pledge show. Then this was announced. Ginger always brings it live and I can’t wait to see him again. Short of Metallica/Tenacious D/Black Sabbath, there is no-one who will clash with Ginger, and win.
As I Lay Dying – ALID have been amazing the last two times I’ve seen them at Wacken, so seeing them in this country will be a nice treat. They are opening the main stage on Saturday so they’ll get no more than 30mins, but that is ok. I’ve seen them do an hour twice.
Reckless Love – I’ve got nothing on this. Sorry. 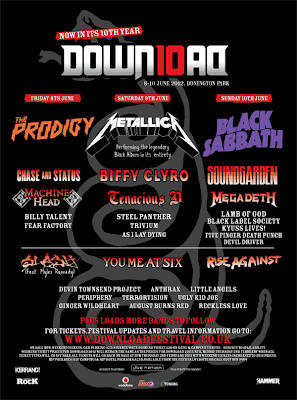 So, another superb announcement from the Download guys. I have purchased a weekend ticket. This is turning into a cracking festival. A healthy balance between awesome headliners and a great under card.

Right, let’s talk about Sonisphere. In the last festivals post, I talked about how it was strange that they had not announced anything yet. I also said I thought it was strange that they hadn’t even commented on the lack of an announcement yet. There was a little splash in the back of a recent Kerrang saying “Next Week: Sonisphere! You Won’t Believe Who They’ve Booked!” which to everyone suggested there would be an announcement. The night before, on a Facebook wall post on the Sonisphere page, the Sonisphere guys said “think Kerrang jumped the gun”. Since then, there has literally been nothing official. An account was made on twitter called SonisphereLeak which claimed to leak the first Sonisphere announcement. Since then two of the bands they leaked have been confirmed for Download (Slash and AILD) which completely destroys any credibility they had (which was very little in the first place). Just recently, there has been a leak to the Daily Star (of all fucking papers) to say that Queen with Adam Lambert (me neither) and Faith No More are headlining. That would be interesting to see how well that sells. All I know is that I’d be tempted by a FNM day ticket if the undercard was excellent. However, all we know about Sonisphere UK officially at the moment is nothing.

That’s all for festival talk for now. I’ll likely be back after more announcements.
Posted by Mike Tyler at Monday, February 06, 2012