After weeks of speculation, rumours, leaks and general confusion, Sonisphere have announced the first batch of bands for their 2012 festival. Below is the poster and I’m going to review it day by day. I will also have a look at the latest Download announcement. 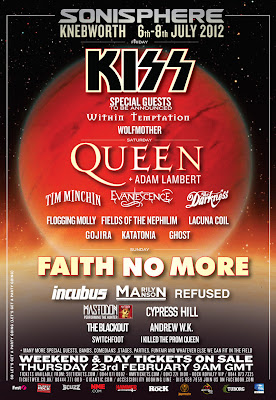 That is a pretty good start, it has to be said.

Kiss – Strong announcement in the context that it is their only European show of 2012. I find it hard to get excited about them though as there is only a handful of their songs I really like. I would watch them if I was going.
Special Guests TBA – I’m seeing a poster which suggests it is Skid Row. I really couldn’t care less about that if it is true. If it is Motley Crue as rumoured, well they were a bit boring at Soni 2010 so another proclamation of meh from me!
Within Temptation – Pretty cool announcement. I like some of their stuff so they would be worth watching.
Wolfmother – Urm, alright then. They were ok at Download 2007 but 5 years have passed, they’ve released nothing of note and changed their band members (other than the vocalist) – not interested. I might give them a “meh, there’s nowt else on” watch but they are certainly not a selling point.
Queen (w/ Adam Lambert) – This is an interesting announcement. Would I watch them if I was there? Yes absolutely. Would I pay to watch them? No. That for me personally is not a good thing when it comes to being a headliner.
Tim Minchin – Always funny. Pretty good booking and it will be interesting to see him try to replicate what Bill Bailey did in 2011. I’m told Bailey had really shit sound at the beginning though, so that could be a worry. Anyway, good booking.
Evanescence – They are a band who I would watch if there was no clash. From what I can see, they are sub headlining the main stage to Queen. Not sure why but that strikes me as odd.
The Darkness – Again, I would watch them but they really don’t do a lot for me.
Flogging Molly – I really need to see this band. I’m told they are so good live.
Fields Of The Nephilim – Well I don’t know anything by them. A brief Spotify did nothing to endear them to me.
Lacuna Coil – Excellent announcement as ever. Really hoped they’d be at Download so well played Sonisphere
Gojira – See Lacuna Coil!
Katatonia – Not bad at all. Decent booking
Ghost – Pretty solid booking
Faith No More – OH FUCK YOU FOR BOOKING THEM FOR THE SUNDAY! Now that I have calmed down – this is such a kick in the face. I really want to see FNM but unless I book the day off with flexi time long in advance I will miss them again. Boo-urns! Well done Sonisphere
Incubus – They do the squared root of zero for me. I almost died with boredom during their set at Rock AM Ring 2008. I wouldn’t watch them.
Marilyn Manson – This is an interesting one. I saw him at Download 2007 for the first 6 or so songs and I thought he was alright. The universal opinion of him though was he sucked balls. So, I dunno what happened after I left but yeah, not good apparently. Reviews of his 2009 set were completely scathing. Andy Copping, the Download Festival booker, said he will refuse to book him until he sorts himself out. That is why this is an interesting booking. Will he be shit again? Who knows?
Refused – I quite like Refused so I would watch them.
Mastodon (playing The Hunter) – I really can’t get into Mastodon. Now, I just gave The Hunter a quick blast through (not all the songs and not all the way through) and it’s alright. People talk of Mastodon as if they are the best thing to ever happen to metal – they aren’t.
Cypress Hill – Leftfield booking but a good one all the same. I bet they would be a lot of fun.
The Blackout – A mediocre man once said “The Blackout can suck on both of my testicles, and even then I still wouldn’t watch them”.
Andrew W.K – Strong booking. I would like to see him one day.
Switchfoot – They seem reasonable.
I Killed The Prom Queen – I got nothing.

So all in all - not bad. It is a fairly strong start in terms of a festival line up. I think considering the wait it could have been better. The big question for me is whether I am going. The simple answer at the moment is no. The complicated answer is two-fold. Firstly, I could book the Monday off work after Sonisphere and go to see Faith No More. This is the most likely option from where I am sitting now. The second part of the answer is that if I get the job I have an interview for next month, then I might just treat myself to a weekend ticket and hang out and watch all those “meh why not” bands while seeing Faith No More and the others who I really want to see. If that option happened though, I still wouldn’t watch Mastodon!

Anyway, Download did a mini announcement last week to fill out their line up a little more and to be honest, it was quality. 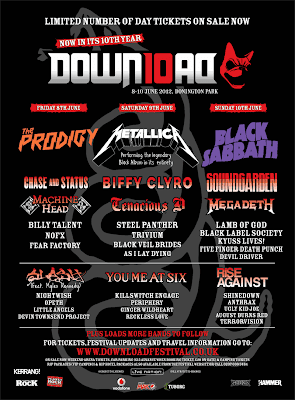 NoFX – Sounds like a great announcement to me.
Nightwish – Well, that’s awesome. Hoping they will be better than they were Brixton 2009
Opeth – Pretty strong announcement although not that bothered by them because I will likely see them do a longer/heavier set at Wacken.
Black Veil Brides – They sound pretty decent. I like what I’ve heard thus far and intend to see them.
Killswitch Engage – Superb announcement. I am interested to see them but I fear they will lose a clash.
Shinedown – Superb announcement. So happy they have been announced.

So overall, I still think Download looks stronger of the two festivals. There of course will be more announcements for both so it will be interesting to see what happens next. If I do end up getting a ticket of some description for Sonisphere, I shall let y’all know. I don’t have any problem admitting though that I do not in the slightest regret getting a Download ticket instead of a Sonisphere ticket.
Posted by Mike Tyler at Monday, February 20, 2012