My attention this afternoon was drawn to something which occurred on Twitter involving a member of the UK Parliament. Every story I’ve read on the issue and the subsequent rebuttal discussed the matter of offence. Before discussing that, these are the tweets in question (I didn’t screen cap these – it is taken from Sky News). 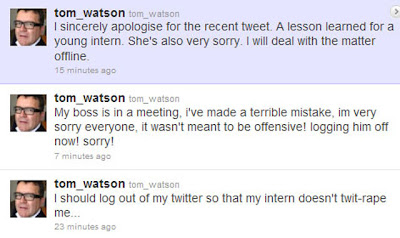 Now, that could be considered quite a silly thing to do considering Tom Watson is an MP (and I believe a member of the Shadow Cabinet). But what I see is someone having a bit of harmless fun at their boss’s expense. It is the sort of thing I’m sure most people would consider doing if they could get away with it. This has been blown all out of proportion though because of her choice of words. Because the tweet contained the word “rape”, people are outraged. Just to be clear, she used the term “twit-rape” which is an accepted 21st century colloquial term associated with social media of all forms and is in no way offensive. So much so that a new word has been formed when such action takes place on Facebook – it is called frape. These words are not offensive. They are widely used by people who have been “fraped” or “twit-raped” and due to the context they are used in, are not offensive.

What I am trying to work out is who is offended at the mere use of the word “rape”, regardless of context. I recall the current Newcastle boss, former TV pundit Alan Pardew using the word when describing a particularly nasty looking football challenge – “he absolutely raped him”. People were very offended over this use of the word rape but again, it is all about context. I wasn’t offended by his use of the word rape, much like I am not offended by the use of the word “twit-rape” or “frape” – context is so important in these situations. Furthermore, to anyone that is offended, may I remind you that you are allowed to be offended just as much as someone is allowed to be offensive? What gives you the right to think just because you are offended that your opinion somehow means more? It doesn’t. Neither this situation today, nor the Pardew situation I referenced glorifies rape, nor does it make rape seem like less of a hideous crime. I think it is safe to say that no-one needs reminding how horrific the crime is. The word in itself is being used to apply to different situations and different contexts. I feel like I am repeating myself by labouring this point about context but it is important to me. People get so offended by the use of certain words without paying attention to the context in which they are used and it really annoys me.

While I understand and accept the need for Tom Watson to apologise for this whole mess, I respect him more for his rebuttal to the needless over-reaction to this tweet by the media. I am somewhat distressed that, if you believe his side of events, that The Times and The Sun were after more information on the intern in question. Things like that really make me despair about the state of media in this country. He says very clearly that she is young and made a mistake – that should be the end of it. My final thought on this is that she did nothing wrong considering the context, and if you are offended by the use of the word rape, regardless of the context, then you need to seek help.
Posted by Mike Tyler at Thursday, January 26, 2012