Am I alone in not wanting snow?

I’ve seen a lot of people put on Facebook that they want snow. Now, to put this into perspective, when I say a lot, I have 116 friends on there (I don’t horde friends or be under some delusion that people who I used to go to school with are friends) so actually it is not that many people but it certainly seems like a lot. It is Christmas now (well it is in 10 days of this writing) and as a result, people are getting hyped up for snow. I can only assume, and for anyone this does not apply to – please forgive me, that people want it to snow because it looks pretty. I can’t argue that it looks pretty. In fact, this is a personal favourite photo that I am in (and there aren’t many of those). 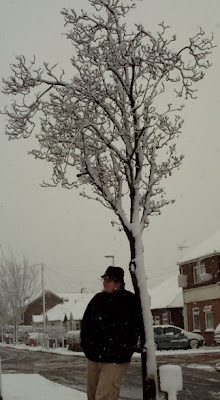 Even with the opportunity to have another photo like that taken, I really don’t want snow. The actual time period where we have snow is quite fun. Because it is so infrequent, it is amazing watching it snow. Its fun to walk out in the snow and its fun to lark about in it (snowball fights and such). But, that fun is limited to about 37 minutes. After that, you have to deal with the complete arsehole known as ice. Ice in your drink is a good thing. Ice packs on an injured limb are also quite nice. Shit tons of ice all over pavements and roads is not good! The thing is the snow that sets disappears fairly quickly as people are walking out in it. It just makes life miserable once the snow has gone. The amount of times I nearly broke my neck last time it really iced over...well I lost count. I remember one walk to the train station where I almost fell 5 times (someone laughing at me for almost falling stopped paying attention to what they were doing and fell. I don’t believe in karma but that was wonderful).

And then of course, you have the issue of public transport. I fully accept this doesn’t affect any of you driving folk (although y’all have my sympathies with the ice on the road) but it is such a farce that every time we get a big freeze, or we get snowfall, the trains stop running and buses just decide to run whenever they damn well please. That walk I referenced just now took place in early 2010 when I was on my way to my old job at Iceland. It took me nearly an hour to complete a 20min walk, to find out every train was delayed and I would be late for work. I phoned informing them of this and they said “get a bus”. When I explained that wasn’t likely to happen anytime soon they informed me that I wouldn’t be in trouble for being late (as it wasn’t my fault) but I would have my pay docked. Cheers! This sort of thing could be avoided if there was no snow!

So to all of you people, who want snow, enjoy it for the time that it is falling. Enjoy it for the 37 minutes of entertainment you (and if it happens, I) will have while its fun. But, I want to hear no bitching about the ice and especially no bitching about how cold it is! You can’t have snow unless it’s really cold! (Unless it is synthetic snow...like you would get in a snow machine. Seriously outside of movies, what are they for?)
Posted by Mike Tyler at Friday, December 16, 2011