The last two times I’ve been to The Talking Heads, I have been very happy with certain drink deals they have been running. For a pub to sell bottles of Fosters Gold and Budweiser for cheap would be impressive. For a gig venue to do it, well that’s just outstanding. I saw no such offers this time but figured I took full advantage of the offers last time (as the hangovers the next day will attest to) so I wasn’t that bothered. Besides, it is not like The Talking Heads charges more than most gig venues charge anyway. Some I’ve been to do charge more but you are paying a premium for drinking in a gig venue. There are only certain times when I will be unhappy with a venues drink prices and that is when they are overly extortionate for no real reason. One example of this was at a club night where it was £4.40 for a bottle of Budweiser. Now, it was my own fault for not choosing to drink the rats piss that is Becks or Stella out of a clubs pump. But I never anticipated that anywhere (outside of London) would charge that. I had one pint at £3.30 which I thought was perfectly reasonable. I then saw a 500ml bottle of Pedigree behind the bar. Pilling pound coins into my hand, I asked how much the drink would cost and was delighted to be told it would be £2.50. Assuming that I go back to the Talking Heads (I’ll address this later); I have found a new drink. Furthermore, it is another reason to support the unofficial study that I am doing that Ale is better than Lager. Lots of field research involved in this study as I’m sure you can appreciate. This really is a major detour to have gone on when discussing a gig. I don’t often give much mention to the venue, especially not the first 300 words. I can’t say anything else about the venue as such (until the end) as nothing has really changed about it. Oddly for Ginger’s gigs, the ticket desk is right at the front door (it was also there in 2010) whereas for every other gig it is by the actual venue entrance. Can’t explain that one, but I don’t think it needs to be explained. Anyway, I think a gig happened so let’s talk about that, eh?

On twitter and formspring, long before the tour started, Ginger was hyping up the support for the tour. The support was made up of two bands; Exit_International and Hawk Eyes. Usually when a support band or bands are announced, I will go out my way to research them (to see whether or not it is worth going in early for). I remember researching both of these bands, and I remember enjoying them. Come gig day though, I couldn’t remember a single note, riff, song - nothing. I was quite annoyed at myself for this but decided I would take a chance and head down early enough to see them both. After all, they wouldn’t be receiving as much praise as they are from Ginger and from other sources if they were both shite. First on was Exit_international. Within the first couple of songs of their set I knew I liked them. I was sat at the bar during their set admittedly, but what I heard I enjoyed. A set packed full of riffs. Remaining at the bar, Hawk Eyes were next on and they were just as good as Exit_International, if not slightly better. Another band packed with riffs. This truly was going to be a good gig. Two support bands opening for Ginger Wildheart, both of whom have a new fan in me. I am going again on Sunday to see Ginger so I will make sure of two things. 1) I will reacquaint myself with both bands before leaving for London on Saturday; and 2) I will not be at the bar while they are playing. After walking through a path which leads to the front of the stage (helpfully), I got near-ish to the front for Ginger. 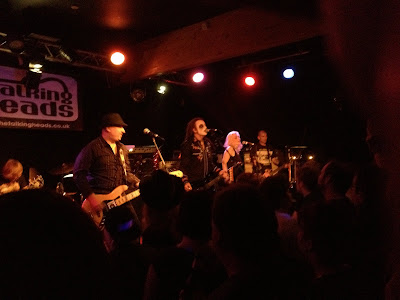 There are a number of songs from The Wildhearts and Ginger’s solo back catalogue which I absolutely love. I had seen on formspring that there would be songs in the set which had rarely been played live or never played live. As a fan of Ginger’s, I was both happy to see this while being slightly disappointed almost because that surely meant some of my favourite songs would not be played. I saw most of my favourite songs played when The Wildhearts came to Portsmouth in 2009 so it is not something which would have ruined the gig for me. What actually happened was a number of songs which I had rarely listened to became favourites. Inglorious opened the set and it was a superb way to kick off the gig. Other songs that were played included The Hard Way, Splattermania, Can’t Do Right For Doing Wrong, Slaughtered Authors and The Wildhearts cover of the Cheers theme. All of these songs have become favourites along with my favourite songs from the set; Vanilla Radio, Suckerpunch, 29x The Pain and I Wanna Go Where The People Go. All in all, it was a superb set performed by an outstandingly tight live machine that makes up Ginger Wildheart & Friends. During one song, and it is to my shame that I can’t remember, Random Jon Poole got the entire crowd to sit down. Having seen Slipknot a couple of times, I figured there would be some “jumpdafuckup” moment, but unless I missed it – there wasn’t one. Oh well. A fantastic set list is one story of this evening. Another story is how surreal certain things were. Ginger tweeted during the day that the crew had found Dragon Soop for sale and had bought some. This was test driven by Ginger on stage (who didn’t approve of the taste). It gets hot in the Talking Heads, especially down by the stage. One person passed out in front of the stage which put a halt on proceedings while the girl, Rebecca, who passed out was attended to. An impromptu song was written on the spot about Rebecca, wishing she was ok. Across the room, someone else then passed out. He was quickly revived and the show went on, until he passed out again! He was taken to sit outside (there is a fire door quite near the stage and helpfully near where this person was). Ginger asked for this door to stay open, and the security guard slammed it shut. I accept there are health and safety rules for venues to adhere to but that seemed a bit of an over-reaction. Another top quality night out courtesy of Ginger. 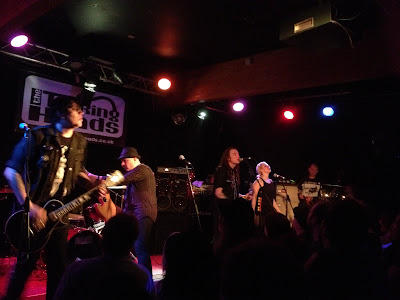 Another top quality night out in the Talking Heads, but I’m wondering if it will be my last. I had booked two tickets for gigs at the Talking Heads, Alestorm and InMe. I received emails from Ticketweb saying that both gigs had been cancelled and that I was getting a refund. Now, for one to be cancelled, fair enough; that happens and I’m not going to lose sleep over it. For both to be cancelled though; that was peculiar. I did some digging and found out that the tours were going on as normal. Ticketweb had the rest of the tours listed but the Soton dates were nowhere to be found. That made things even stranger so I visited a number of other ticket agencies and found both Soton gigs, not cancelled but moved. So, Ticketweb were refunding me for a cancelled gig which wasn’t cancelled at all. The dates were relisted on Ticketweb with the new venue being The Cellar. After a little more digging, I’ve seen that 5 or 6 other gigs have been moved from the Talking Heads to The Cellar (or in one case, the Joiners). Why have these gigs all been moved from the Talking Heads, I found myself wondering. Is it about to be announced that it is closing? I really hope this is not the case as I quite like it. I would be gutted to see it go, but at least I can say all 5 gigs I saw there were excellent, and were capped off by a fantastic Ginger Wildheart gig.
Posted by Mike Tyler at Friday, December 16, 2011