I went to London for the weekend just gone and was at two gigs, Manic Street Preachers and Ginger Wildheart. This is a review of the Ginger Wildheart gig which took place Sunday 18th December at the Relentless Garage in London.

Well, the bar was set high for this gig. Not only had I been to a gig of the year contender at the O2 Arena the previous evening but I had also seen Ginger in Southampton the previous week (hey, you could read about that here!) I saw the set list before heading to this gig of the birthday show (which took place the night before) which looked immense. I knew full well that we would be getting the standard tour set list for this gig but I couldn’t help but hope for a bit of the magic of the Birthday gig to show up for the last night of the tour. One aspect of the birthday show which made me insanely jealous of anyone who was there was that CJ from The Wildhearts was on stage for a selection of songs. During the gig, I was asked by a friend if someone standing near me was CJ. I then turned and looked and said “nah I don’t think so”. I was looking at the wrong person! Turns out that was CJ standing less than 5ft from me for most of the gig!

The gig was at the Relentless Garage which I had never been to before. I have to say that as a venue I really like it. Not overly enamoured with the drink prices but then I didn’t drink so I can’t be that annoyed. Within seconds of Exit_International taking to the stage, I could tell that this venue had much better sound than the Talking Heads. As a result of this (and me not sitting round the corner by the bar) I could hear them properly and they seem like a really good band. I said last time they were full of riffs and this is still the case. I really enjoyed them. For their last song (I think), they were joined on stage by Ginger. It has to be said that the presence of Ginger on stage made them better. I noticed they came on stage late so I worried what affect this would have on the night’s proceedings. It turned out that actually it had no effect. Hawk Eyes were on not long after them and they were also pretty good. I preferred them in Southampton if I were to be honest. I’m not sure if that’s a good thing considering they had better sound in London but oh well! Ginger joined them for a song as well which was cool to see. Both support bands played with Ginger at the birthday show which sounds like it was pretty cool.

It was at this point of the gig, in-between Hawk Eyes and Ginger that my friend pointed out CJ was no longer in the crowd. I wondered at the time if he had left. My answer would come soon enough! Anyway, this image is the tour set list which had been played at pretty much every gig on this tour. We didn’t get Something Weird (Going On In My Head) in Southampton, but aside from that this is the set list we did get (I Wanna Go and 29x were swapped around as well). As the London date I was at was a date on this tour (rather than the Birthday show), I expected something similar to this. 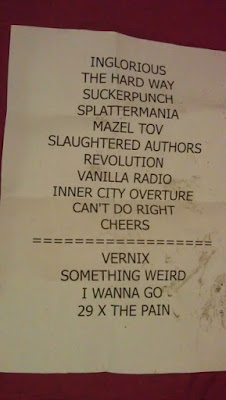 The tour set list is what we got for the most part and it was excellent. The superior sound quality of the Garage really added to how good Ginger and his band were anyway. Credit needs to be given to Victoria Liedtke for how much energy she bought to the stage throughout the entire gig. I didn’t see her stop jumping or dancing once! Much like in Southampton, Ginger and the guys paid tribute to a very funny internet video during ‘This Revolution Will Be Televised’ by changing the lyrics slightly to incorporate “Fenton” and “Jesus Christ” – very funny! Personal highlights of the main set for me would have to be ‘Suckerpunch’, ‘Mazel Tov Cocktail’ and ‘Cheers’ (since hearing the studio version of The Wildhearts cover of that, I’ve listened to it a lot!) ‘Cheers’ was the last song before the encore and I thought that a noticeable absence from the set list was Vanilla Radio. I assumed at the time this was due to the late running of the gig but this didn’t take anything away from the gig for me as it had been really good. 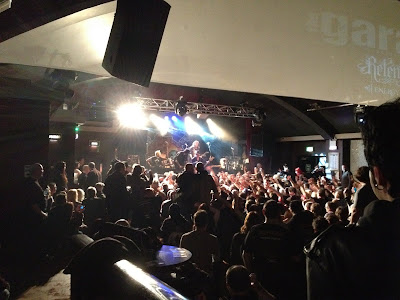 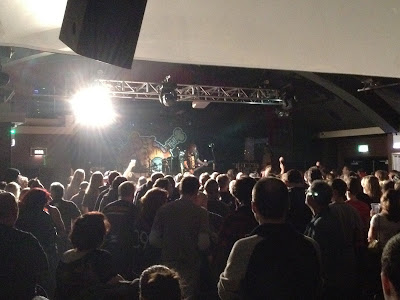 As the band went off for the encore, the crowd sang ‘Don’t Worry ‘Bout Me’ and Ginger came back out on his own to join in. After thanking everyone that needed to be thanked, Ginger introduced CJ to come out on stage! This was really cool that I was getting to see this, having missed the birthday show. Random Jon Poole and Denzel came back out to join them as well giving us 3/4s of a Wildhearts reunion! The first song they played together was ‘TV Tan’. Quickly following that was ‘My Baby Is A Headfuck’ which was immense. Ginger played this at Sonisphere but it was so much better hearing it in London. Then there was a cool moment as joining Ginger and CJ on stage was Ginger’s son, Jake. They played Vanilla Radio together which made a cool moment even cooler. The final song of the night for me (damn you Sunday trains) was ‘I Wanna Go Where The People Go’ with the touring band and CJ. It was a fantastic rendition of the song with a brief medley of “massive cock and balls” in the middle. I’m not going to claim I know what that was about but it was certainly funny. 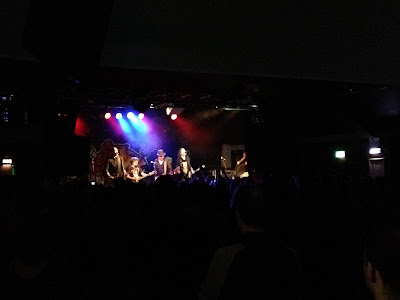 This was another excellent gig and capped off a great weekend. Ginger is taking a break from touring next year. As a fan this will be sad, but there could not have been a better way to conclude touring than this evening in London. I will definitely be in the crowd when Ginger tours again and I recommend that if you like Ginger and/or The Wildhearts, you get yourself there as well. This gig makes the decision for gigs of the year harder again. Not that I mind this decision being a hard one as it means reliving some great memories!
Posted by Mike Tyler at Tuesday, December 20, 2011