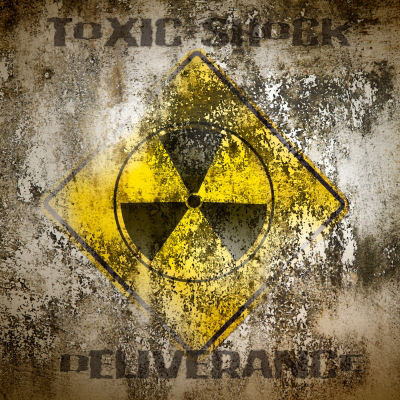 Toxic Shock is a Portsmouth based band, formed out of the ashes of other local groups. They describe themselves as a Classic Rock/80s Hard Rock band and list a number of big names as their influences. Toxic Shock has just released their debut EP, Deliverance, which is available at all your favourite online haunts (links to follow). The big question here though; does Deliverance deliver?

Before talking about the songs that make up the EP themselves, I think there needs to be a mention made about the production of the EP. It is of high-quality and is clear that some time has been put into making this sound as good as it does.

The EP starts with Make Ma Stand which is an excellent way to open. The song is a mesh of the 80s hard rock style Toxic Shock bill themselves as along with a healthy dose of all the good stuff which emerged from Metallica’s Load/Reload era. This track is a dirty rock & roll song which you could break the speed limit to (I’m not recommending you do in fact break the speed limit to this song, I’m just saying you could!). Insane is a superb track which honours the influences the band cite as having, while making it their own at the same time. While honouring the rock music of years gone by, it gives off a modern vibe almost. Quite like that present when listening to The Darkness or Steel Panther, although to their credit, Toxic Shock is nowhere near as cheesy. Insane is very catchy with a riff you can bang your head along to.

Decreasing the speed somewhat, Vanity is a nod to the grungier side of rock. There is a definite Audioslave/Pearl Jam vibe to this song. It is a noticeable change in style to the previous two songs but this is by no means a bad thing. If anything, it shows off the bands ability to alter their sound, while still writing good material. The title track, Deliverance, is another good song influenced by icons of the past but this time different. I hear a fair amount of Black Sabbath and Thin Lizzy in this track. It is another good example of Toxic Shock taking all the best from the bands that influenced them while making the song sound modern. This is another catchy song which forces you to bang your head. This is not optional. The final song, Bring It Down is a great closer as it is simply kick ass hard rock music.

Deliverance is a great debut EP from Toxic Shock. The influences present on this collection of songs are vast, and yet the songs sound fresh and modern. I would highly recommend listening to this EP. Deliverance without doubt delivers (and with that, is the last time I will engage in word play with the EPs title!)