I walked into The Talking Heads for the 2nd time in 3 weeks really quite excited. Seeing a Fozzy headline show was something I had not done. I also was only able to watch half their set at Sonisphere. As I arrived, there was a band on stage (I didn’t catch their name). They seemed alright but the in between song banter bugged me. I get that if you are a local band opening a gig like this, there is a chance I won’t have heard of you. Hell, I don’t know many of the support bands I see when I go to gigs unless I research them. Anyway, you don’t need to remind me that I don’t know who you are. They also came across as disrespectful to Fozzy. I get that Fozzy probably didn’t choose them to open and it was the promoters call (or possibly the venue...I dunno how this works) but they said something to the effect of “coming up are two bands who are just as good as Fozzy”. That may or may not be true (for the record, in this case it is not) but your job is to open the gig and pump up the headline set, while selling your own material. Perhaps this is a minor thing which bugs me but it did. Maybe the intent was not to be disrespectful but to me, that is how it came across. I liked what I heard from them but I’ve spent more time talking about how they annoyed me rather than their music. Like I said, they seemed alright...whoever they were! The next band was called Verses. They seemed pretty good and got a fairly good reaction from the crowd. However the job of really warming up the crowd before Fozzy fell to a band called Jett Black. They were excellent. I was told by a friend that I had to see these guys and I do not regret it one bit. They were a lot of fun and are also a good listen. As a crowd, Jett Black warmed us up, and it was time for Fozzy. 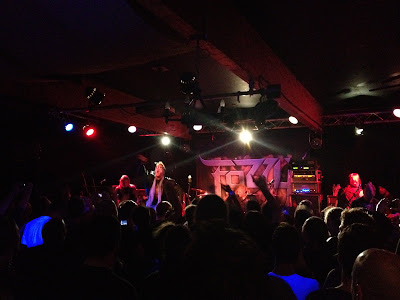 From the off, Fozzy were superb and this remained the case until the last note of Enemy at the end of the gig. Personal highlights of the gig for me included Paraskavedekatriaphobia (Friday the 13th), God Pounds His Nails, Under Blackened Skies, Enemy, Let The Madness Begin and Martyr No More. It truly was a superb setlist from Fozzy. A superb performance from the band which was met with a superb crowd. At the end of every song, there were loud and prolonged Fozzy chants. Chris Jericho early on in the gig asked if we could come in the trailer with them and come to every gig. Considering how good this gig was, I’d be in favour of that. The chants varied throughout the night from “we love you Fozzy, we do!” to “fuck you Reading!” when we were told we were the best crowd on the tour. Granted, it was only the 2nd night and we might have been topped since then but what the hell, I’ll take it! 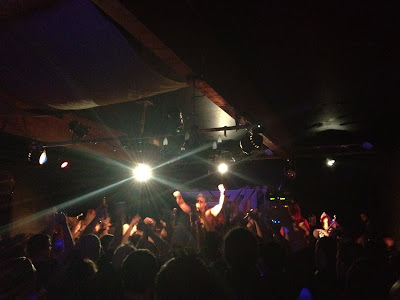 I recall reading on Twitter that this tour will be Fozzy’s last visit to the UK for quite some time. I hope that this is not true because they were superb. If it is though, I’m sure when they come back; they will be just as good, if not better.
Posted by Mike Tyler at Sunday, November 06, 2011