For Alter Bridge, Thursday marked their biggest headlining gig ever. For me, Thursday was the first time I would be seeing a headline Alter Bridge show. I saw them at Rock AM Ring 2008 and remember being impressed with them. I also remember wanting to see them both times they came close to me (they did UK tours with Portsmouth and Southampton Guildhall dates). However, I never got sorted out and ended up missing the gigs. I was looking forward to this gig not just because I would be getting to see Alter Bridge again but they were being supported by a band I love in the form of Black Stone Cherry (BSC). I’ve seen them twice when they’ve come into town and once at a festival and it’s all been good. The other band on the bill was one called Theory of a Deadman (TOADM). I did some investigative work, with the help of Spotify, and found out they seemed pretty good.

Arriving in the MEN arena, I noticed that the upper tier was covered. I can only assume that is because Alter Bridge isn’t quite a MEN sell out band just yet. The timing of the arrival could not have been worse. The MEN Arena does things differently to any other arena I’ve been to in that to access the standing area, you have to walk through the lower tier of seating and get to the floor that way to have ticket swapped for wristband. I quite like the system as it means avoiding a 10 mile walk to get to the only standing entrance door at the o2 Arena. However, this time around I didn’t care for the system because as we walked in and got maybe 3 stairs down into seating, the lights went out for TOADM. That was really quite dangerous actually. There was no way of seeing where the steps were, and there were a lot of them to go. I think that may need to be changed. Anyway, didn’t fall down them this time so no matter!

TOADM headlined this tour out in America. It was a 5 band tour with Alter Bridge and BSC (plus two other bands) playing below them. I don’t know if it was the fact they weren’t headlining or whether they are just boring live, but I wasn’t overly impressed with them. They lacked any form of stage presence I felt. Musically they were fine but they weren’t great. They had some sound issues (not sure if that’s due to them being a support band though) but they can’t be blamed for the set being not all that enjoyable. I hope it was due to them not headlining, but they aren’t massive in this country so you would assume they would want to be in top form to sell themselves to all of these potential fans watching them. I wasn’t impressed by them and to be honest I probably won’t go out of my way to see them again. They did come out to Blame Canada from the South Park movie though, which was win. 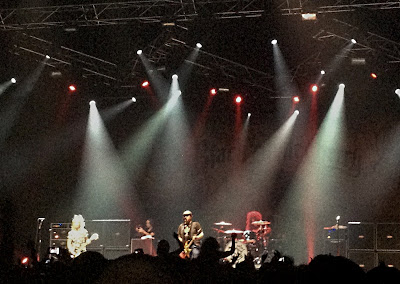 After a short break, it was time for BSC. I had no doubts about how good these guys would be. I had said before their set that seeing them at this gig would probably tide me over and I wouldn’t end up going to their March headline tour. They played a set which evenly covered their 3 studio albums which was good. They are just fantastic live. There is little for me to say which hasn’t already been said elsewhere but they are just one of those bands who deliver live every time. One thing which made me smile was that sing-along moments were loud. It seemed that the now much bigger crowd generally approved of BSC, especially during the song Peace Is Free. The energy coming from the band was infectious. The crowd was loud for the last two songs, Blame It On The Boom Boom and Lonely Train which signed off a great support slot. At the beginning of the set, I said I wasn’t going to see them in March. Now, I probably will. 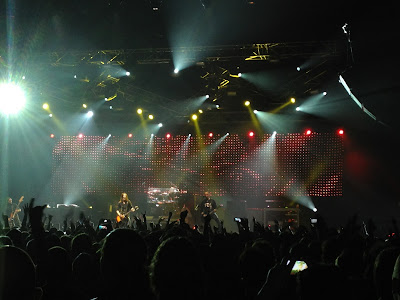 Having seen Alter Bridge only the one time, and it being at a festival, I knew they were comfortable on the big stage. As soon as the lights went off, the MEN crowd exploded. I thought they were loud for BSC but damn! Opening with Slip To The Void, they proceeded to play a very strong set list (although from what I am hearing, it wasn’t that different to their last tours set). The band seemed to be genuinely blown away by the response they were getting from the crowd. Highlights from the set for me include the opener, I Know It Hurts, Metalingus, Blackbird, Isolation and Open Your Eyes. The rest was really good to be fair. I only have one gripe with what they did on stage and that occurred during the encore. When they went off, the crowd (or at least quite a few people near me) were chanting for more. The house lights didn’t come back on, that’s usually a good indicator they are coming back! Anyway, they played Open Your Eyes and took a pause. During this pause, Myles Kennedy thanked the crowd again for coming out and paid tribute to Freddie Mercury (Thursday marked 20 years since he passed away). Him and the other guitarist then proceeded to duel (I guess is the best word) with guitar solos. It was a bit strange and seemed pointless to me. I kinda guessed throughout the rest of the show that these guys could play guitar. Anyway, aside from that, it was a cracking gig. Alter Bridge will headline and sell out arenas in their own right soon I think, and they certainly have the ability to perform on the big arena stage. BSC will I’m sure continue to grow and grow in popularity in this country if they continue to be as good as they are live. TOADM though...I just don’t know. Maybe their headline shows in March next year will be better? I don’t know, as I won’t be there.
Posted by Mike Tyler at Saturday, November 26, 2011