There is one thing I am sick of seeing and that is people using the “we didn’t want to offend people” excuse to justify their actions. Especially at this time of year, when there is always a story about how a company has to send “season’s greetings” rather than saying “Merry Christmas” so they don’t offend. However this isn’t a story about someone trying to ruin Christmas. This is about remembrance. At this time of year, people in this country (and others around the world) wear poppies. The reason for this is simply to remember and honour those who died in the two world wars. Remember the contributions and sacrifices they made for this and other countries. Due to the nature of my work, I am unable to wear a poppy while working. However, I have one which I donated for today which will be attached to my coat shortly. It is a simple gesture but one that should not be taken away from someone who wishes to honour the war veterans, well, that is unless you work for Poundland.

A complaint by a Poundland employee in Lisburn has led to the company changing its policy over the wearing of poppies.
The woman walked out of the store in Bow Street Mall after she was asked to remove the poppy from her uniform as it was against company's dress policy.
Poundland said after listening to customer and staff feedback it had reviewed its UK policy.
The company apologised for any unintended offence caused.
“We have for some years operated a clear and simple dress code that store colleagues are requested to observe," said Jim McCarthy, Poundland's chief executive.
"The policy was designed to prevent issues arising that for whatever reason could upset individuals or communities and to focus our energy on raising money for colleague-nominated charities.”

OH DO FUCK OFF! How could wearing a poppy upset or offend someone? I can’t think of a scenario which isn’t really unlikely and/or ridiculous to justify having a policy which bans wearing one. As for violating a dress code policy, that is absurd. I’ve worked in retail (for more than 1 company) and have never read anything which suggests the wearing of a poppy should not be allowed. At absolute worst, there has been something about management discretion. Discretion is fine and fair enough, but no manager I have ever worked for has banned the wearing of poppies. The thing which makes this worse for me is that I’m reading contradicting stories on their u-turn on dress code policy. More than one source has said they changed their stance on the matter only after customers threatened to boycott their business. If that is the reason why the change was made, they ought to be ashamed of themselves (more so than they should feel already). In their efforts to try not offend people, they have offended every man, woman and child who fought in the war and gave their lives to protect the country.

So like the member of Poundland staff who refused to remove hers, wear a poppy and show that you remember those who gave their lives for us. 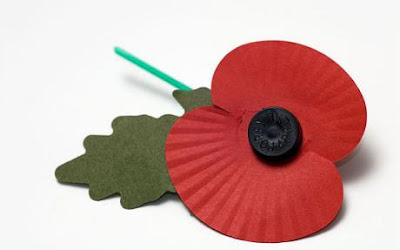