For weeks and days beforehand excitement for this gig had been building. This was a gig I’ve been looking forward to since the end of 2010. Volbeat had to cancel their 2010 tour of the K, which included a Portsmouth date. I was gutted as it meant another long wait before seeing them for the first time. That first time came at Sonisphere 2011, when they opened the main stage on the last day. They were one of the best bands that day for me (topped only by Slipknot) and in my review of them, I said I couldn’t wait to see them in October. That day was yesterday.

Before talking about the gig, I would like to quickly discuss the venue. The gig was at the HMV Forum which is in Kentish Town, London. I previously dismissed the chance to see Dimmu Borgir in this venue as I thought it was too difficult to get to (how things change, I’m seeing Dimmu in just under a month in Manchester). Since then, I realised the error of my ways and when gigs have gone there, I have seriously considered them. I’d not been though until yesterday and I would like to say that I am very impressed. There were discussions on the train up about how London needed another iconic venue such like the Astoria. I feel the Forum could fill that gap, until something new is opened. The only concern I have about the venue is sound quality. The bass drums over-powered everything 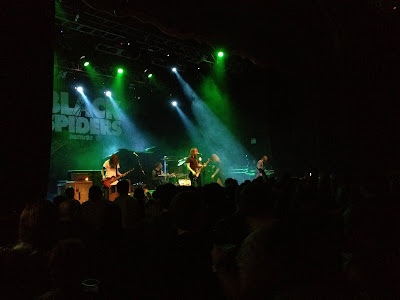 The night was opened up by Black Spiders, the band who were due to open for Volbeat on the cancelled 2010 tour. I’ve seen them in a number of support slots but they seem to get better every time. I hadn’t seen them since they released their first album, Sons Of The North, so I was looking forward to hear some newer material. A headache stopped me from seeing them at Sonisphere 2011 so I was very pleased they were supporting again. I was right to be happy about this as they were excellent. Opening with the crowd pleasing Stay Down, they got the entire crowd involved right away. Commanding all middle fingers in the air and several loud chants of “Fuck You Black Spiders”, the band was off to a very strong start. One thing which can’t be avoided is that very few people in the venue appeared to not know who Black Spiders were. During Stay Down and at other points throughout the set, the crowd were given the chance to sing the next line, which they did and loudly. Black Spiders have played a lot of support slots and it is clearly to their credit, as they played last night in a venue of 2000+ people, most of whom knowing and liking them. The set included KISS Tried To Kill Me, St Peter and Just Like A Woman from the Sons of the North and a couple of songs which were new. Black Spiders were excellent, and I fully expect them to headline the HMV forum one day, considering the reaction they got there. I am hoping they will do another headline tour in 2012. They did 2 legs of a headline tour this year and I missed both legs. Assuming there is a do-able date, that mistake will not happen again. 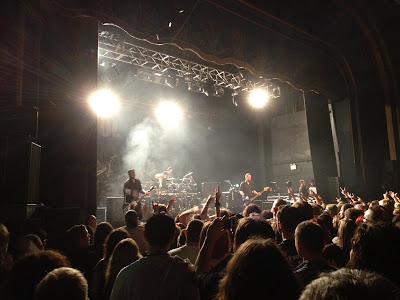 As the floor started to fill up more, the anticipation for Volbeat increased. I’d seen reports from other dates where people had said it was the best gig they had ever been to. As the lights dimmed and the intro music was played, the place was hopping. Volbeat got off to a fantastic start, opening with The Human Instrument, Guitar Gangsters & Cadillac Blood and Heaven Nor Hell. Volbeat signalled early they intended this night to be epic. The roars from the crowd were near deafening when they played the first few bars of a song, especially at this stage for The Mirror and The Ripper. Not long after this, an acoustic guitar was bought on stage. This could only mean one thing and that was the tribute to Johnny Cash in the form of Sad Mans Tongue. The introduction of this song was a popular choice for the crowd as the cheer for it was massive. So far, the gig had been flawless for me and I was looking forward to hearing it continue to improve. After A New Day, Michael Poulsen addressed the crowd, asking what we wanted to hear. A number of suggestions were yelled out (quite a lot for Still Counting) before the band played brief parts of Motorhead and Metallica songs. Poulsen then said after asking for more suggestions that he likes Napalm Death, which got a cheer. During this cheer, Poulsen said something which I didn’t catch, but I can only assume it was an introduction as Mark “Barney” Greenway from Napalm Death walked out on stage to do vocals on Evelyn with Volbeat. This was a very cool moment. 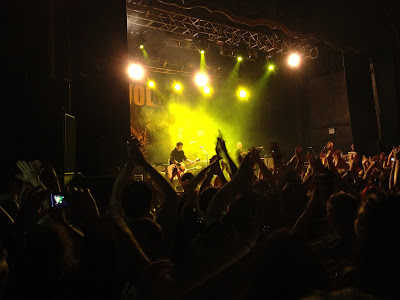 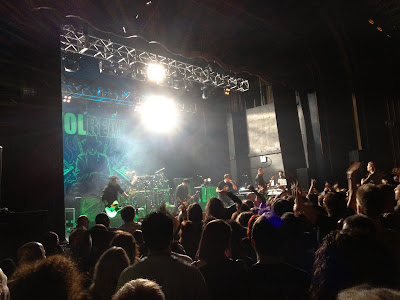 The rest of the set was just awesome (including the brief homage to Queen with I Want To Break Free), ending on 16 Dollars and Still Counting. 16 Dollars was excellent but Still Counting was just phenomenal. The crowd sang the opening lines of the song before Poulsen took over, and it was just superb. After a short break, they were back and blasted through a stunning encore which consisted of A Warrior’s Call, Fallen, Thanks, I Only Want To Be With You/Boa |(JDM) and Pool of Booze, Booze, Booza – the encore was just as tremendous as the rest of the gig. Volbeat played the opening of Raining Blood to close arguably the best gig I’ve been to this year. I used a lot of superlatives to describe how good Volbeat were, but honestly I could have used more. They were outstanding live last night and left me hoping for another UK tour next year (and a Wacken appearance hopefully).
Posted by Mike Tyler at Sunday, October 30, 2011