It’s been a week since the Rugby World Cup has ended and already, I miss it not being on. Just to briefly cover what happened in the final weekend of the tournament, Australia beat Wales in a hard fought contest to the bronze medal. They won 21-18. The final was another close fought contest between France and New Zealand. Both teams didn’t play their best and I think it is fair to say that the best team finished 2nd. New Zealand won the game 8-7 and ended 24 years of waiting for another World Cup. Frances wait continues as they lost their 3rd World Cup Final. I said on September 18th that my pick was New Zealand, and they won the tournament. I am quite pleased about this and am excited to see what will happen at the next RWC, in England. Will Martin Johnson be England’s head coach for the 2015 RWC? IT is hard to say, but I think if he doesn’t go before, he will go if England doesn’t win the 2012 Six Nations tournament. I bet the Wales v France game will be slightly interesting this time around eh?

In other rugby news, since I last posted, Bath have played 3 games, 2 in the LV Cup and 1 in the premiership, and won all 3! The first was against Newport Gwent Dragons (16-46 to Bath), the second was against Worcester (which I was at, the full time score being 46-13) and yesterday against London Irish (the final score being 13-12 to Bath). 3 big and important wins for Bath going into next weekend’s game against the undefeated Harlequins. The Quins are on an utter roll at the moment and I don’t know if Bath will have enough to beat them, but I hope they do as I will be there. It is good to see the players from the Rugby World Cup returning now and hopefully we can build on these three games and keep going forward. The Heineken Cup campaign starts on November 20th, so that is something to look forward to.

That is all the rugby talk for this post done with, now on to another regular topic of this blog and that is music of the live variety.

A while ago now, I purchased a ticket to see Rammstein play in London on their Made In Germany 1995-2011 tour, which will be a best of tour. I really enjoyed them on the LIFAD tour but a best of tour can only be better than an album tour in my mind. Details of this tour have been scarce until recently. They hadn’t even released the track list for the best of album which is due to be released alongside the tour so while educated guesses could be made about what would be on the tour and what wouldn’t, no-one knew for sure. In all fairness, we still don’t but now we have a better idea. The first nugget of information was a picture of the stage layout (similar to that you would find on Ticketmaster). 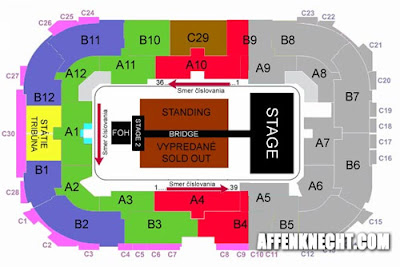 TWO STAGES AND A BRIDGE?! Awesome! The show indoors in Manchester was superb, so I can’t imagine how much better it could be with 2 stages and a bridge. This makes me very happy. However there is still the stumbling block before complete excitement can be had. What will be played? Rammstein don’t mix setlists up (when they have such a complex stage show like theirs, it would be nigh on impossible to mix it up). Before the LIFAD tour, they played some rehearsal shows and the setlist was changed slightly but what they played then is much what we saw in Manchester and at Sonisphere. The following is the setlist from one of Rammstein’s recent rehearsal gigs for the Made In Germany 1995-2011 tour:


Oh my fuck! That is pretty much the perfect Rammstein setlist for me. I could make some additions to make it the perfect setlist but this is amazing. This setlist absolutely smokes the one from the LIFAD tour. Seeing this makes me seriously excited for February and I’ve got a number of big gigs lined up before that! This is going to be just sublime. I also saw details from the show surrounding the song Bück dich.

As the band vanishes, Richard starts to play with the Keyboards. I've seen 'reviews' that say he turn's DJ and that this is the Combichrist influence, utter nonsense, he was playing the same intro as on LAB, complete with Woooo sections with the crowd, but with no burning keyboard. Eventually the stage centre doors open up and in a cloud of light and smoke Till reappears with Flake on a leash, Schneider and Ollie also tag along bare-chested and on all fours like dogs as well. (The only real area of conjecture that I am going to make is that in the full show, Till will have all three of them on leashes and he will lead them along the runway to the second stage. like dogs) So for tonight the area that is pretending to be the second stage is lit by four white spots from above, all other lights go out. Paul remains dressed on stage left Ollie and Schneider take up their instruments. , Flake is dressed in leather mini shorts with drop down butt flap, thigh high boots and a ball gag harness. There is no box for him to crouch on and he's pulled here and there by Till, really abusing him. Finally he adopts the position, crouching on all fours at the stage front, Till undoes the flap of Flake's shorts and we're treated to the sight of the pale soft moon of Flake's butt! No squirty penis tonight, but Till does pull out of his pocket a rubber pink dildo which he then pretends to insert into Flakes ass, but then, genuinely laughing, Till moves between Flake and the audience so he's blocking what he's doing from the audience, and tries to really shove it in, judging by Flakes reaction I'd say he nearly got there! just after that Flake while trying to re-button his shorts is yanked by Till and falls awkwardly onto a mike stand which looked like it hurt him, there really wasn’t enough room to do it all properly on the corner of the stage they were using.

So it goes without saying that I’ve purchased another ticket to see them in Birmingham.

That is all for this post. I have nothing else to prattle on about. Posting this the same day as my Volbeat review. Look out for a review of Fozzy coming soon from their Southampton gig as well as some other stuff. Now, go outside.
Posted by Mike Tyler at Sunday, October 30, 2011