Generally speaking, I don’t tend to wake up at 3.50am for anything unless it’s a trip to the toilet or a fire. However, Sunday was an exception to the rule as I was heading up to Milton Keynes to see Foo Fighters for the second time this year. Wembley Arena was a fantastic gig, and I honestly didn’t think it could be topped. However, as the Foo Fighters were one of the best live bands I’ve seen, it would not be a waste of time going to this gig. I also wanted to experience seeing the Foo Fighters in a massive crowd. The National Bowl holds about 65000 people, so it would be a little different to the Wembley Arena gig. We set off so early in order to obtain golden circle wristbands. As a side note, this was futile as people were still getting wristbands about 2pm. No matter though, what’s done is done. 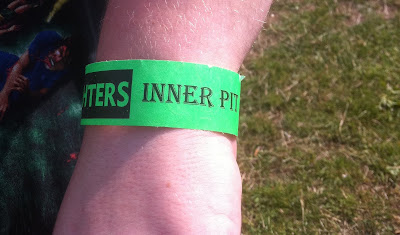 The venue is quite out the way of anything. We got our wristbands about 9am or so and still had 5 hours before the gates would open. I went to the gig with a friend called Paul as well as others, who suggested going for a walk. I thought that would be a great idea. We embarked on about a 2 mile walk from the Bowl to Milton Keynes city centre in order to find a Wetherspoons. We found one and spent about 2 hours sitting there, slowly nursing drinks and having some lunch. The walk back was a lot easier as we knew where we were going and realised we took a long way to the town centre. Getting back to the Bowl, the gates were open earlier than advertised and the arena was filling up nicely. With our pit wristbands already obtained, we jumped the entire queue of people waiting to get wristbands (me walking past them thinking “bet they didn’t get here at 7.30am...bastards”). We took a position and got ready for the bands.

I knew nothing about this band before they came on stage. As they walked on, I was informed it was half of Supergrass. Anyway, they played a set of covers, some of which were alright and some of which didn’t make sense. Tiredness caught up with me during the Hot Rats set and I actually found myself falling to sleep during their set. I walked off to get a drink at the end of their set and heard a cover of Pump It Up which truth be told, wasn’t very good. 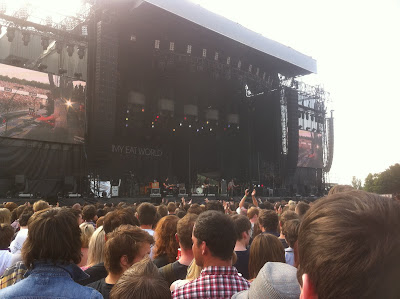 Jimmy Eat World were very enjoyable and also very good live. I don’t know how well they are suited to a big stage, but I feel that in a smaller venue (such as Portsmouth Pyramids, hint hint) they would be awesome. The set opener, Bleed American, served to wake me up. The rest of the set was very enjoyable and included a very good new song. Finishing on The Middle and Sweetness, Jimmy Eat World played a very enjoyable set and were really good. I hope to see them again at Reading where I hope they will be just as good. 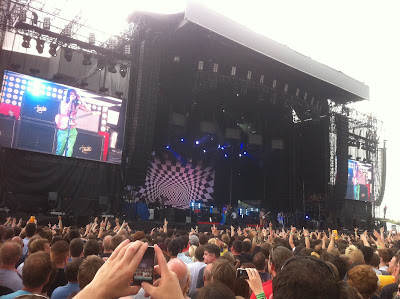 I was interested to see how good Biffy Clyro would be in this main support slot as they are headlining Sonisphere this weekend. If they were pretty poor, then chances are they wouldn’t be a successful headliner at Sonisphere. They came on stage and opened their set with The Captain and got a thunderous reaction. I was very impressed with their stage presence and simply how good they were live. One thing which also impressed me was how full of energy they were. They played a 14 song set which comprised of 9 songs from Only Revolutions. I thought this was quite a surprising amount from one album, but the set was a good one. Biffy proved that they are capable of holding their own on a big stage and also they will do a very good job headlining Sonisphere. I imagine they’ll need to expand their stage show but I imagine theirs was the way it was on Sunday because they were in a support slot. I would also assume that they will expand their setlist a little. I think they need to do a little more than Only Revolutions. It is a very good album when played live, but they need more to fill their 90min headline set. If you are unsure about whether to see them, you should. I will be elsewhere, but that’s because seeing them in this slot was enough for me. They were superb live and I honestly believe this is the start of their explosion. If they aren’t the size of Foo Fighters in 5-10 years, I will be quite surprised. 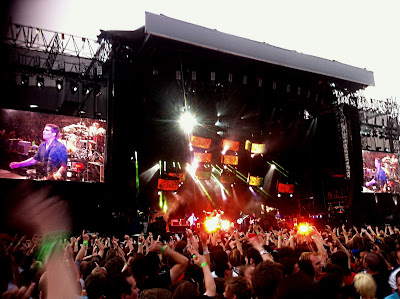 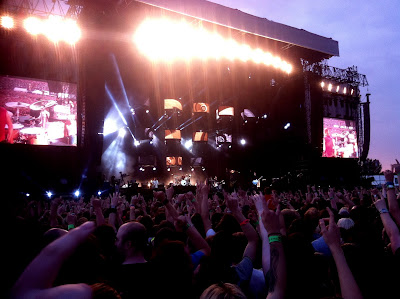 Biffy Clyro did a fine job getting the crowd warmed up for Foo Fighters, but honestly I think a one man band would have sufficed (The Hot Rats were a two man band and therefore don’t fit the criteria). The place got very loud when the Foos came out on stage. What happened then was so impressive as Dave Grohl and the rest of the Foos destroyed the National Bowl. They ripped it a new arsehole and then proceeded to rip the new arsehole a new one (lovely imagery there). The inner pit crowd was split into two (t-barrier set up) and there was a walkway in the middle of this barrier, which Grohl frequented quite regularly to the fans delight. On the lighting/sound desk, there was also a small stage which allowed Grohl to play closer to the fans who were further back. The set was packed with classics new and old, as a lot of new material got an airing. Every song turned into a mass sing along, providing further evidence that the Foo Fighters truly are one of, if not the best live band out there on the circuit currently. One of the bits of “advice” Guitar Hero 2 gave its players were that the crowd paid to see you play your songs, so don’t just get up there and jam. Foo Fighters not only get up there and jam significantly longer solos than you’ll find on record, but they don’t lose the crowd for one second during it. Stacked Actors is probably the best example of this occurring, a song that is just over 4mins long on record but live is over 10mins. One memorable aspect of the gig was someone crowd surfing for about 5-6 songs on a rubber dingy. The persistence of that man was impressive, and even got a shout out from Dave Grohl. The crowd singing along to Best of You was particularly memorable, singing along the Whoas even when the band had stopped playing the song. Things like this show how good a band is live, and this was another aspect of the show which showed how good a band are live. The only example I can think of this good was seeing the crowd sing along to the end of The Memory Remains at Wembley for Metallica. A sheer perfect moment. 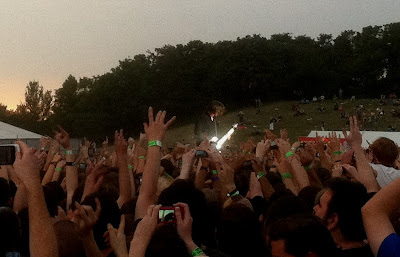 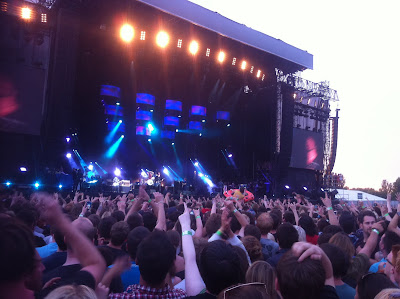 The video during the wait for the encore was also special as usually crowds I have been in get bored waiting for the band to come back out. A video came on the big screens with Grohl asking the crowd using fingers how many songs they wanted to hear, with cheers getting louder each time the number of songs increased. He showed that 5 songs would be played in the encore, and the crowd went ballistic with happiness. Grohl came out and played Wheels by himself, and talked to the crowd during the song, talking about how special the MK gigs have been to the band. I think it is safe to say the feeling was mutual. He played Wheels and his bit of Times Like These from the little stage on the light desk, which was a nice touch. Foos always know how to deliver and then some on a promise, which is why the encore was actually 6 songs. We were treated to a song by Seasick Steve, played with the man himself and John Paul Jones from Led Zeppelin while Grohl drummed. That was another awesome moment for me. The set concluded with two massive sing alongs in This Is A Call and Everlong. Fireworks shot into the sky at the end of the set to conclude a gig which cannot have disappointed anyone. The Foo Fighters were phenomenal and if they aren’t the best live band on the circuit, they are in the top 5. No arguments. 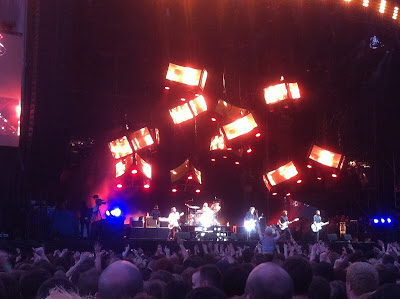 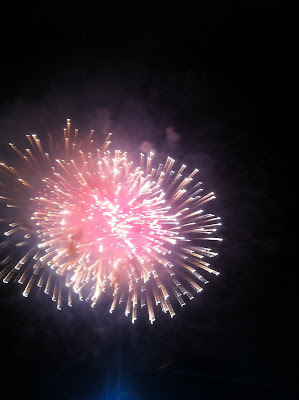 I might have come across as a bit ass-kissing of the Foos then but honestly, they were better than I described. It just isn’t possible to put into words just how good they were. I could talk at length about the journey home and the shambles that is the National Bowl when it comes to leaving. I will avoid that though by simply saying the Foo Fighters killed it in Milton Keynes. They were worth the ballache that came with leaving at 4.30 in the morning, and not getting home until 4am Monday. They were worth it all, and more.
Posted by Mike Tyler at Tuesday, July 05, 2011