Feed The Yak and He'll Get Fat

Yesterday marked the 2nd jaunt to somewhere else in the country to watch Pompey play away from Fratton Park. The very idea of going to watch Pompey on the road is awesome, but having seen Pompey lose to Brighton in my first away game – the dream was somewhat ruined. However, we had discussed for quite a while going to the Leicester game. This game sounded good to me as we dicked them earlier in this season (6-1!) and the game wouldn’t be too far away from where my brother lives, so possibly seeing him would be an added bonus. That didn’t pan out as such, but I was still looking forward to going to another away game, and I hoped that the result would be more favourable than the last away game I went to.

Leicester isn’t that far away, so we set off about 8 so we could get there within plenty of time and didn’t have to rush around to find things (such as pubs, bookies etc). The journey up was fairly painless aside from missing the right turn off and ending up having to enter Leicester from the north rather than the south (I was already feeling grim as it was!) and dealing with Leicester’s roads and one way system. Holy shit, I thought Portsmouth was bad (well, it is) but Leicester is much worse I think. Anyway, after a walk along a canal, we made it to the town centre but more importantly, a Wetherspoons! It was quite a nice pub actually although the staff seemed to think it was a serious issue that we needed ID. It is serious I accept, but we all had ID and were confused why they were so edgy about it. Maybe they picked up on the fact we weren’t local. Anyway, after some chat about the state of the world (always seems to be the way when drinking beer), we made a move to a Ladbrokes and Greggs and then made a move back to the ground. 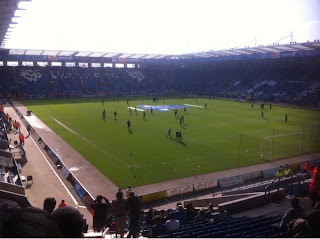 I really like the Walkers stadium. It is a decent size for a football ground and the stands are still reasonably close to the pitch. We were up in one of the corners of the ground which to me appeared quite intimidating actually as it was almost like we were pinned in. Still, I thought from our seats we had a great view. The weather was really nice as well, but we were sat in the worst place for the dropping sun (note to self, invest in sunglasses). The game itself was pretty good although Pompey showed some of the same problems as ever (sitting back after scoring, not closing down players, balls to nowhere, Lawrence being Lawrence etc). We won 1-0 which was the main thing. However the thing was amazed me was the atmosphere. Now, I’m used to being in Fratton Park when it’s lively. The 6-1 game is a perfect example of that. Singing from whistle to whistle etc – it is generally a good atmosphere at FP and only a handful of times have I witnessed otherwise (Cardiff and Derby this year I’d say). However the home crowd for the most part barely looked alive. Hardly any singing, no clapping aside from when they came close to scoring and only pockets of them getting upset if decisions didn’t go their way. It was entertaining some of the chants coming from our fans. Nothing overly witty about them, I accept but entertaining all the same. Leicester had a fan with a drum, similar to one of our fans at home games. Main difference is when our drummer plays, fans clap along. At the Walkers, this didn’t happen so much. However our fans did clap along and chanted “If you can’t bang a woman, bang your drum”. Generally speaking the chants were aimed at their fans, such as “your support is fucking shit”, “we forgot you were here” “please be quiet, you’ll wake them up”. However I personally enjoyed “feed the Yak and he gets fat”.

Anyway, following the game (and the wait in the car park which apparently used to be the old stadium) we made the journey to Coventry. This was for Dave to see some family and also to visit a restaurant called Wing Wah. Similar sort of deal to Water Margin in Portsmouth in that it’s an all-you-can-eat and you go up to the middle and grab food. Quite a lot of the food was very nice and the desserts on offer were very impressive (including a chocolate fondue). I’d say on the whole it is as good as Water Margin, possibly slightly better. The only let down for me wasn’t being able to get a photo of the Buddha statue (the resemblance was uncanny!) Very thankful as well to Dave’s family as well for paying for the food. Very good of them. It was distinctly apparent to me however at this stage that the headache I got at the football wasn’t going away, and when we stopped at some services I was able to get headache pills. Can’t remember much of the journey home as I was drifting in and out of sleep, but overall a good day was had. I mentioned earlier we were talking about current affairs at the table, and that came back up on the journey home when we were discussing the fact that we (as a part of the UN) have taken (or are taking) military action against Libya. I would talk about this more however I don’t really feel there is much I can say about the matter. It is about time something was done to help the people of Libya, but I’m not sure if this is the right course of action. I would just like to share thoughts on the action from a friend of mine from University that he tweeted. So, via @OfficialSpudUK:

“Liam Fox, the easiest way to get more aircraft to Libya would be flying them of an aircraft carrier...oh wait yea”
“We could be much more effective in enforcing the #libya #noflyzone by basing a carrier in the Med to launch missions, never mind huh!”

He speaks a lot of sense. Anyway, that is all I have for now. 2 blogs in one day, lucky people! (In some respects). I will be back soon with another blog about something

Soundtrack of the blog. Spotify for iPhone playlist:
http://open.spotify.com/user/mikeytrrp/playlist/4sA5TBy3QjhWGuwo8fjStK
Posted by Mike Tyler at Sunday, March 20, 2011