With blog titles such as this, I should write tabloid headlines. Well, probably not.

Nick Griffin was barred from the Buckingham Palace garden party this past week for making the event a political one. What I mean by that is he used his invitation (which all UK MEPs received) to claim that this made the BNP a major force in politics and no longer a fringe party. This was the reason given by the palace though I doubt any of us (well, excluding one million or so...) would have had much to say if the official reason was thus: “Nick Griffin’s invite to the Buckingham Palace tea party has been withdrawn because he is a twat”. That, I guess, might raise the question of the queens use of language, but that’s a separate issue. The result of this issue however was much worse than the original invite as every media source then reported the fact Nick Griffin, leader of the BNP, was not allowed entry. I don’t think for one second Griffin was annoyed he was not allowed to enter. Granted, he might have wanted to try and get a photo with the Queen. But the story of him being barred got his name, the BNPs name and the one million or so people who voted for them in the spotlight. Free publicity for the BNP will always be welcome. It allowed Griffin to stand up and say that him and one million others were barred entry from the garden party. That’s technically inaccurate as not every BNP voter was invited but semantics aside, he was able to verbalise his “hurt feelings” about the barring to the country. While the majority of the country will have heard this news and thought “good” or something similar – there are people in this country who were not sure about voting BNP last time who will think this story and event is unfair to the BNP – and therein lies the problem.

The media hate the BNP (even if the Mail and the Express/Star post headlines about too many immigrants killing children or something of the like). Infact some examples of these can be seen below 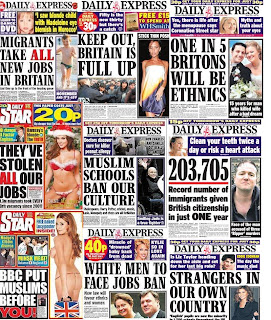 That evidence came from a blog called Enemies of Reason by AntonVowl (twitter username). See, it’s not hard to attribute people is it Keith? ;) (If you aren’t on twitter or seen any news whatsoever, that would be lost on you).

Anyway, back to the original point (it is hard not to take a stab at these papers for being exactly like the BNP, yet claiming to hate them). The media hate the BNP and they want you to hate them as well. That is a fair stance to take considering their policies of hate. But the papers and media centres really boobed by reporting this story in the way they did. The reason I say this is because of what I said above – it gives the BNP free publicity an makes them more attractive to people who are very right wing in their own political sphere who see the establishment having a go at them. Of course, this is not the case at all, and Griffin would have been allowed to enter had he not been suck a cocky boob – but that’s how Griffin has portrayed the situation to the public when asked by the media for his comments. It’s a complete farce. The best way to deal with the BNP is like how you would deal with an annoying child that is playing up. Ignore them, and they will soon go away. Imagine a world where the media looked at Griffin’s mob and didn’t report on what they were doing. People who actually support them (read: racists) would have to go out their way to find out what the party was up to. If they genuinely believe there are one million people in this country that support them, they are deluded. Ignore them, and they should go away.

In other news:
• Jon Venables – he’s a bit of a shit really isn’t he? I won’t go into all the details about the case, but basically one of the murderers of Jamie Bulger has gone back into prison for child porn offenses. At what stage do we realise this guy will be of no value to society, will just be a drain on taxpayer money and will never be able to re-enter society as a norm. People get edgy when the issue of the death penalty comes up – but this man deserves it. He truly does – there is no reason to keep this man alive.
• The PM visited America. Apparently the main talking points were the BP oil spill; BP lobbying the last government regarding the release of the Lockerbie bomber and whether an agreement could be reached regarding the man who hacked into the computers. I have three thoughts, one pertaining to each issue. 1) As much as the two leaders want to discuss the oil spill, there is not an awful lot they can do about it. 2) I don’t know if there is anything in it, but it seems awfully suspicious that Straw and the Scottish Justice Minister won’t go and meet the American senators. Of course they are not obliged to, but if they have nothing to hide, why not? 3) I’m really happy to have heard the PM stand up for this guy (I want to say he suffers from asperger’s but I’m not sure) who hacked the computers of the FBI. Of course it is a serious crime, but considering the context and the potential circumstance – he should be tried in this country, in our courts.
Posted by Mike Tyler at Saturday, July 24, 2010